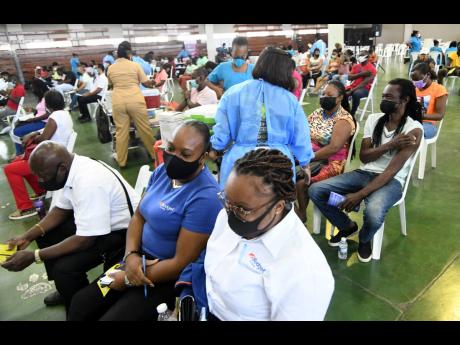 Health workers tend to persons who came out to be vaccinated at the National Arena on Tuesday as part of an islandwide vaccination blitz.

A policeman who yesterday turned up at a vaccination site in the Corporate Area said he decided to take the shot in order to boost his chances of being promoted in the Jamaica Constabulary Force (JCF).

The cop, who asked not to be named, said he and several other colleagues were told by a high-ranking officer that vaccination was mandatory for a promotion programme in the force. For him, taking the jab had little to do with reducing the chances of becoming gravely ill, or dying from the novel coronavirus.

"I got the order that said that if I am not vaccinated, I can't be promoted," the cop alleged. The constable's allegations come weeks after the JCF denied reports that it is denying promotional training to some of its rank and file members who have not been vaccinated against the virus. That position was affirmed by Senior Superintendent of Police, Stephanie Lindsay, when THE STAR contacted her for a comment yesterday. "Nothing has changed in relation to the policy of the JCF on this matter," she said.

Public Defender Arlene Harrison Henry said that her office is unaware of any law or regulation, under the Public Health Act that makes the taking of any vaccine mandatory

"We hear a great deal of talk about those who are vaccinated will be treated preferentially. People are making it out to be a simple matter, that 'oh it is for the public good, that everyone should be vaccinated', but it is more complex than that. I don't tell my staff at the OPD (The Office of the Public Defender) that they should get vaccinated," Harrison Henry said.

Approximately 300,000 Jamaicans have received at least one dose of the vaccine. Health Minister Dr Christopher Tufton said that health workers will be seeking to inoculate some 150,000 persons with the first dose of the vaccine this week.

A vaccination blitz is currently taking place across the island. Des Ann Watson, a St Mary teacher who took the jab yesterday, admitted that she had fears of taking the vaccine, but made the choice after thinking about the safety of herself and others.

"For me, I weighed the pros and the cons because I am a teacher, and I will be exposed to many kids who can carry the virus. It was important that I safeguard myself and others as much as possible," said Watson.

Her sentiments were echoed by Lacelles Williams, 69, who outlined that he made the decision to take the vaccine after Prime Minister Andrew Holness said that Jamaica is currently at the early stage of a third wave of the virus.

"Mi just mek up mi mind say this COVID thing is getting from bad to worst. I heard it over the radio that if you take the vaccine it will reduce your chances of dying from the virus. I did this against my daughter's desire because I am a old man and don't want to die from this virus," he said.