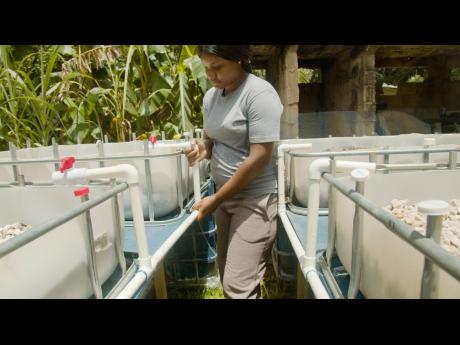 Vanessa Green has embraced aquaponics as a farming method. 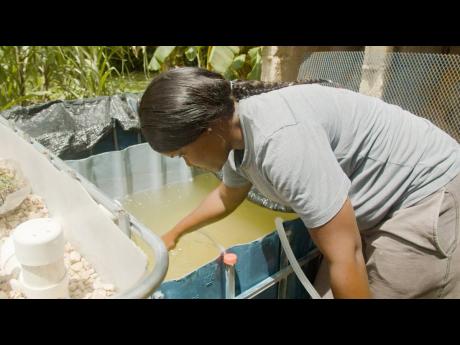 Vanessa Green says she appreciates the ‘freedom’ that aquaponics has afforded her.
1
2

Vanessa Green was intrigued by the operations of a fish farm and wanted to start her own. Her curiosity led her to begin aquaponics farming, a venture she thoroughly enjoys.

Green engaged in the modern-day farming techniques for couple months in her backyard in Porus, Manchester, after she enrolled in a free training seminar offered by INMED Caribbean. The sessions piqued her interest and now she is savouring the benefits from her soilless farm.

Aquaponics is defined as climate-adaptive farming technique that combines aquaculture (fish farming) with hydroponics (soilless crop production). Growing up in her rural community, she admitted that she was not always fond of farming, but as she hit adulthood, it became an interest to her.

After completing her course with INMED, Green proceeded to set up her system under the guidance of INMED Caribbean's technical team. She used discarded tote bags and repurposed them as fish tanks and grow beds.

"INMED's guidance through the process of setting up my system was extremely valuable. [They] helped me with plumbing work, setting up of tables and designing the layout and formation of my system. They even advised me on the purchase of the correct air pump, mesh, water pump and air stones," she said

The 28-year-old shared that her farm consists of four tanks that house 600 tilapia, which supply four grow beds of tomato, scallion, lettuce and cucumber. She also raises layer chickens.

Prior to enrolling with INMED, Green said that she was familiar with the term aquaponics but was able to expand her knowledge with the training. Her joy could not be hidden as she shared with the news team the health and environmental benefits her new farming strategy provides her with.

The May Day High graduate agreed that with traditional farming, the work is a bit tedious and strenuous, however, she did not hesitate to appreciate the 'freedom' that aquaponics has afforded her.

"There is less of everything. There is no weeding, no watering if rain nuh fall, no hoeing, no ploughing because the water is already there. I don't have to go out in the field because everything is in my backyard. There is less pesticides, just strictly water," Green stressed.

While she praised the conventional method of farming, she told THE WEEKEND STAR that she believes more persons should engage in farming. She said that although she is not sure of the number of persons that are currently invested in aquaponics, she believes that if more persons become educated, it would be good. You don't have to wake up and go into the field and you don't have to be doing so much work as with traditional farming or pay anyone to rent their field from them, this is yours," she said.