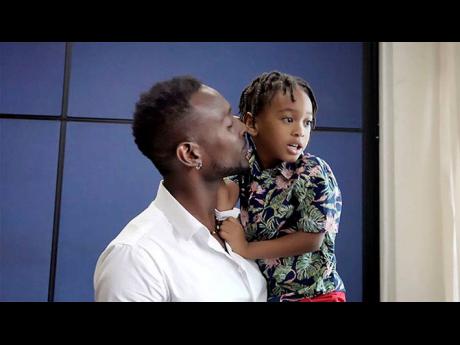 Now in his second year of online learning, baby genius Soul-Heart Stewart continues to excel academically on a level that is way beyond his years.

Dwayne Stewart, father of the brilliant five-year-old, said Soul-Heart is way ahead of his class at McCam Child Development Centre, but taking part in the school's activities is extremely important for his development.

"The teachers try their very best with him and we are appreciative of that. Because of his autism, there are certain things that he should know that he may just bypass. For instance, he can do calculations in his head but he doesn't really know how to work it out. His spelling and reading are great. He knows high-school level work but he does not know how to explain himself fully as how he comes by the answer," he said.

Soul-Heart has high-functioning autism, which causes him to perform exceptionally well, and he is deemed to be cognitively 'higher functioning' (with an IQ of 70 or greater) than other people with autism. THE STAR readers were introduced to the little genius in 2019 after his parents found it challenging to get him placed in a school because of his academic brilliance. The article caught the attention of then state minister in the education ministry, Alando Terrelonge, who met with Soul-Heart's parents to discuss how the ministry could assist.

Like other children within his age group who are enrolled in online classes, the programme becomes challenging and distracting for Soul-Heart, but Stewart said he tries his best to keep him as focused as possible.

"I am also enrolled at the University of Technology and I also work, but I still have to find time to keep up to date with his progress. In the nights when I get home, I will go through stuff with him and just continue to test his academic level to see how far he is at. He is ahead of his class, so for instance, if the teacher will give like the alphabet, he will complete his task in record time," he said.

Stewart said that his son can identify numbers no matter how long they are.

"He can identify if it is a quintillion or whatever it is. He is that advanced. I really don't know how else to explain it," Stewart added between laughter.