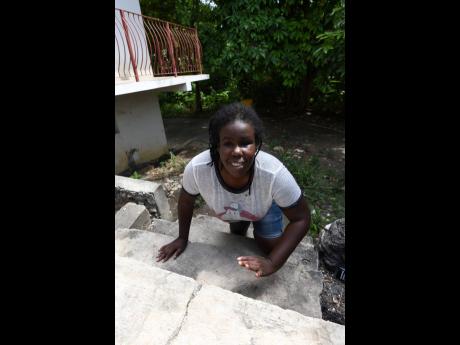 Having lost both her legs to complications associated with diabetes, Cara Moore of Yallahs in St Thomas is adamant that she will not allow her physical disability to defeat her.

The 36-year-old single mother of three operates a chicken business to care for herself and her family, even if it means walking on her knees. Moore noted that she has been a diabetic since she was 16.

"I lost my first leg due to a bone infection in my heel bone. I did several surgeries with the doctor removing dead bones. When I was to do the fifth surgery they said to me it doesn't make any sense because I won't be able to walk so they recommended that I cut off the leg," she shared, noting that this was done in February 2016.

Last December, Moore's other leg was amputated following another infection which broke out after suffering burns from hot mineral water. She admitted that she had misjudged the temperature of the water as the limb is often numb due to her diagnosis.

"I was in the hospital for over three months then I decided to let them take the foot. The first thing that came to my mind was my children. They are my world and I used to take care of them. So it flashed in my mind, 'How am I going to do this when Carian, Maesh and Kimani call on me?' Then I said 'God I'm counting on You, asking for strength'. I began motivating myself. At times when I need to get from point A to B and can't get a taxi to come for me, I feel down then I catch myself and say 'keep going'," she said.

Prior to losing her legs, Moore, who has a first degree in primary education from the College of Agriculture, Science and Education, worked as a teacher. But she has had to make major adjustments to continue providing for her children. After leaving hospital, a friend Audley Shakespeare sent her US$100 to buy food.

"I instead decided to buy 50 chickens and three bags of feeding. I told him what I did with the money and the following week he sent another US$100 and told me to buy more chicken and feeding," she said.

As she walked on her knees to access the small coop, the determined double amputee displayed how she prepares her livestock for sale. Maesh and Kimani, who are 14 and 10, respectively, helped her get the task done.

"They have been my foot. I can send them anywhere and my daughter cooks. Any time I'm doing chicken, they are here 100 per cent with me. They are good children," she said. "Right now I'm in a spot because now we only have one device and everyone is in a different grade so it's difficult for me." Recently, Moore lost 68 of 100 chickens due to Tropical Storm Ida.

"The struggle is real but my family has been good and God has sent persons in my life to help. Dwight Anderson and another friend, Arkene Miller, who I have not seen for over 18 years, heard about my story and came right on board. I respect them fully," she said. The two are on a mission to help raise J$1.1 million to purchase prosthetic legs for Moore from Surgix Jamaica. So far, they have secured $205,000.

Moore added, "I'm asking for help to purchase the legs and I want to build on my chicken business and build on my farming. The price of food has gone high. I have access to land and water, all I want is for the land to be prepared and seeds to start. My aim is to help myself and children until I can help others."