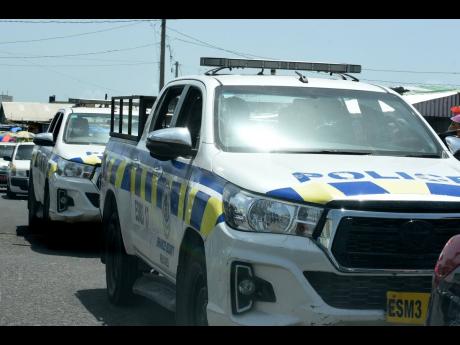 A distraught Jane* said that she never imagined a routine trip to the market in downtown Kingston last Saturday would have resulted in the death of her friend Kevon Mitchell.

Mitchell, 41, a plumber of Havendale, St Andrew, was killed moments after exiting a motor car as gunmen traded bullets.

"Di only thing mi could a do quickly was bend down beside the car, mi couldn't run. Wi just exit the vehicle and him did already go across the road when mi hear baay shot start fire," a tearful Jane said. It was not until the explosions subsided that she was able to locate Mitchell, who was lying motionless on the pavement in a pool of blood.

"Mi run go over to the market a look fi him because him overprotective, enuh, so mi did find it strange say him never deh beside me. Mi turn and say 'How mi no see mi friend?' When di crowd run out mi see him lie down beside a car. Mi start fi bawl out and ask fi help fi tek him up, and after that mi put him ina di car and carry him go hospital," she said.

Jane, a vendor, shared that Mitchell made it his priority to accompany her to the market every Saturday.

"You can depend pon Kevon fi anything, anybody at all. Him mek sure deh deh fi help mi a Saturday mornings wid mi goods from market, that is how helpful he was. He is hard-working, jovial and very nice," she said. Mitchell's landlord, Arlene Donalds, said she had a mother-son relationship with him.

"He did everything for me. If I wanted a pipe fixed and say 'Kevon how much does this cost?', he would say 'Ms D just go lie down. I am not charging you to do anything'. He was never late on his rent. This pains me badly, he was a nice young man and to go like this is quite shocking," she said. Donalds also labelled initial reports of Mitchell being involved in a criminal gang as erroneous.

"He was never involved in anything like that. He was always alone, he never keep friends. I have known him for 19 years. He was a carpenter, a mason, a painter, he did everything and he did it perfectly. He would often say 'Ms D, I don't believe in too much company' and he kept true to that. Nobody was coming here to him in the four-and-a-half years he lived here. I miss him dearly," she said.

Both women said Mitchell did not have a child but was very much involved in his six-year-old god-daughter's life. The police report that up to September 9, 86 murders have been committed in the West Kingston Police Division. This is an almost 25 per cent increase above the 69 people killed during the corresponding period last year.

The division head, Senior Superintendent of Police Michael Phipps, has said that the police will continue to work assiduously in order to restore peace and order.