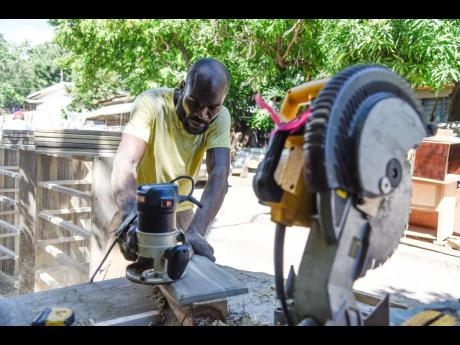 Kenroy Tomlinson puts his stamp on this piece of wood at the workshop in Rockfort, East Kingston. 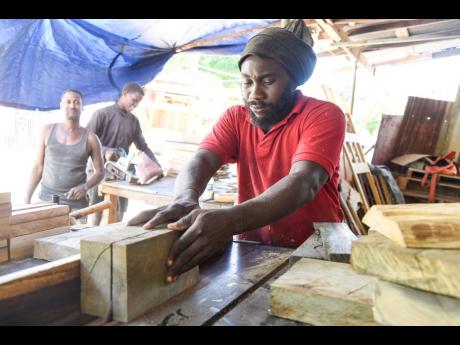 Fatado Walters is hard at work at his Rockfort, East Kingston workshop.
1
2

A lifelong dream turned reality has been a force for good in Rockfort, East Kingston, where a number of youngsters have gained employment in a street-side carpentry business.

One of the men behind the venture is 36-year-old Fatado Walters, a self-taught carpenter, who started the business with his friend, Tony, seven years ago.

"I've been doing this for quite a while now, but I never really thought it would have had this impact. It feels good to know that I am able to give so many persons an opportunity to earn a honest living," said Walters.

The skilled tradesman told THE STAR that, while he had always had a love for carpentry, it was not his first vocation.

"Before mi get into this business, mi used to work at Tastee in Cross Roads where I would fix whatever that is broken. I would also work at various branches across the island. After years of feeling as if I was not doing what l really wanted to do, one day I was talking to a big man friend name Tuff and was telling him about my love for carpentry, because he was also a carpenter. He told me that mi affi love it fi survive inna di business. Mi tell him seh a something that mi wah fi do, so him help mi get some tools and a so me and Tony start do wi thing," recalled Walters.

Along with Tony, Walters started to make several items of household furniture for close friends and relatives, from a makeshift warehouse in Walters' backyard. They had relative success before later moving into a bigger facility along Hillcrest Road in the area.

"When we started out, we never really had anything, just a couple tools to cut board. But, after that, about a couple months later, we were able to bring in a one youth to sand down materials and from there it gradually improved," he said.

While being a carpenter is part of Walters' dreams, he said that his desire to create meaningful employment for youngsters in the tough east Kingston community also fuels his desire to see the business grow.

"Too much of the youths them are idle, and, because most of dem unemployed, or would get a one work here and there but nothing sustainable, dem turn to crime. My desire is to get some big contracts so me can hire more of them," he said.