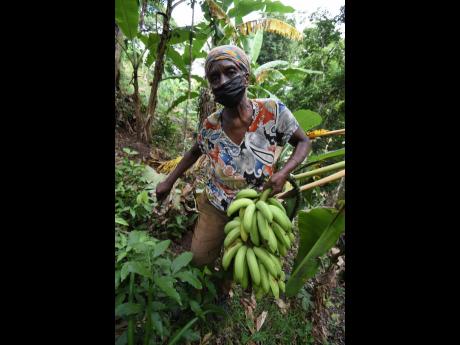 Seventy-three-year-old Jennifer Francis carries a bunch of banana from her field in Dallas Castle, St Andrew. 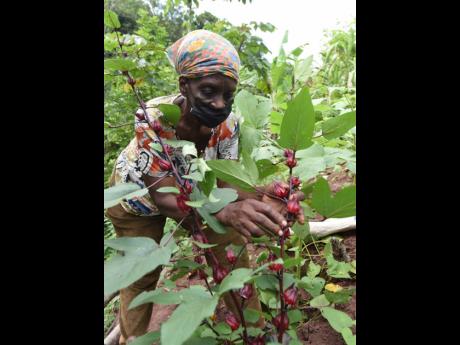 Jennifer Francis looks at sorrel in her field in Dallas Castle, St Andrew.
1
2

Having spent the better part of six decades working on a farm - which enabled her to feed, clothe, and fund her nine children's education - 73-year-old farmer Jennifer Francis, better known as 'Aunty', believes that agriculture has much to offer to young women seeking a decent living.

'Aunty', who is well known in her district of Dallas Castle, St Andrew, said she fell in love with farming as a toddler and her attachment to farming has developed ever since.She recalled ploughing the soil with her father when other kids in her community were busy playing ring games and doing other activities.

"From mi a likkle bit a gal mi deh a farm ... Mi can do anything, enuh, but me love is to be on the farm," said the evergreen Francis, who spends most of her days attending to her crops and bonding with nature.

"From 4:30 inna di morning mi out yah! When mi reach a bush, sun no raise yet, enuh. Not even tea mi drink, some of the time mi will carry a dry crackers and tea inna one mug but is not everyday," she added, while effortlessly making her way up a hill leading to one of her two farms.

"Mi father used to do it but when mi start do farming, dem time deh, mi still inna primary school, mi used to tek di potato and mi plant it. Then when it start run mi gravel it and from there mi fall in love wid farming," she added.

During a visit to her Dallas Castle on Saturday, where THE STAR met with Aunty, her youthfulness was on full display. In fact, the 45-minute trek to her farm appears to be light work for the elderly farmer, who despite a bad knee, walked briskly through the bushes, often times outpacing our news team.

She said that save for a few medical setbacks, she has never missed a day at her farm, regardless of the weather. Aunty believes that her investment has paid dividend. Her crops, which include carrot, potato, yam, cocoa, calaloo, pine, pimento, banana, plantain, pepper, among several others, have served her well throughout life.

Looking back, the seasoned entrepreneur said she would'nt have done it any other way.

"Mi never go high school but a it (farming) mi use and send mi children go high school and dem come out good. One is a soldier, one is a mason, two a mi gal pickney dem have dem decent work and all a dem finish dem school. Most a di times a me one and dem cause fi me husband deserted me," she said.

Aunty said she is very proud of her achievements and strongly believes, particularly now, that agricultural farming is very important for human survival.

"COVID come tell wi say yuh better have a stronger immune system in order fi live strong and healthy. Dem young people yah no wah do farming and it so important. All dem wah is the bling, bling and hype life. Mi know mi fitter than most a dem young girl deh a road," she said.