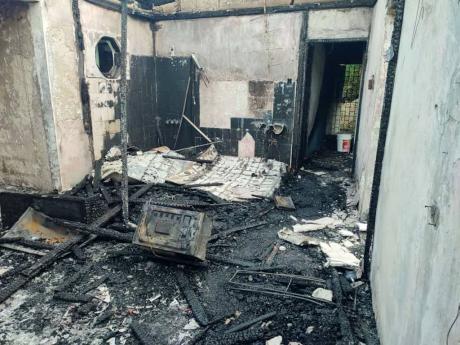 The burnt out home of the Spooner family in Warminster, St Elizabeth. 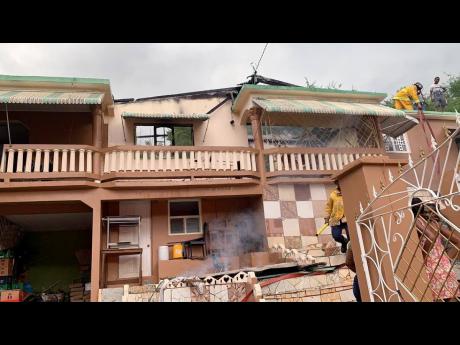 Firemen search through the rubble after the fire. 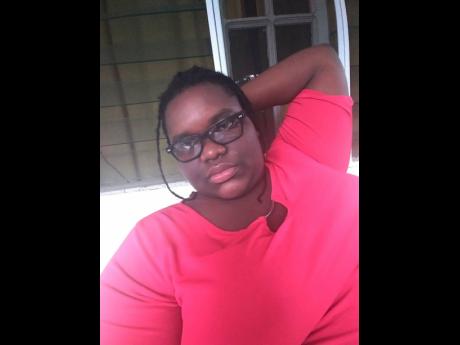 What started out as a quick run to the supermarket to get baby food, ended with a phone call that confirmed the second most tragic news for a family this year.

On Monday, the Spooner family lost everything they owned after fire ravaged their 17-apartment dwelling in Warminster, St Elizabeth, leaving them with just the clothes on their backs and several unanswered questions.

"I don't know how it happened. My sister Jacquneil and I left the house at about 2:15 p.m. with the intention to get back for 3 pm. We just wanted some stuff for my 22-month-old baby cousin who was with us," Asheki Spooner explained. But as they were rushing back to ensure they would not be late for another engagement, her father called and gave horrible news.

"My father called crying and he said 'the house bun down'... that's all he said and then he hung up. I was there trying to process what he said and I got another call from someone and I kept asking what was happening," she said. Minutes later, Spooner said a crowd that had converged on the scene tried to out the blaze as they waited on firefighters, but it was to late.

"We lost everything and the only thing that would have been left was a bed in one of the rooms but it had smoke damage and cannot be repaired. All the clothes have smoke and water damage. Though it was too late, we are grateful for a water truck man who was doing a delivery that saw the fire and pulled out and helped."

She said in less than 30 minutes she watched everything she acquired over the years go up in flames.

"At the time the house was valuated, it was around $60 million at the time .... This has set me back to the point where I can't do anything for myself in terms of work from home. I lost six computers, four of which I used for work. My sister lost her phone, I lost other technological devices. My father and my sister are welders and though my father doesn't stay at the house, he had all his things, all their equipment there and all of that was lost," she said.

Spooner added that her sister, who started a cosmetic business and manufactures organic cosmetics, lost over $900,000 worth of products.

"This after burying our mom on September 10, after all the funeral expenses, dealing with that hurt and loss is a lot right now. The week before the fire was when we started to begin managing a little better in terms of finances and then we lost everything," she said.

Spooner said the family will have to make do with the spaces in the house that were not as significantly affected, though they may ultimately have to relocate.

"A construction person who was volunteering with the clean-up said we may need to tear it down because all the internal walls are compromised. While we may be able to reinforce the external walls, all the internal walls will have to be torn down," she said. "If I can get work equipment, a computer and Wi-Fi, I would be grateful ... If I get back to work then I can help myself. The other main thing is getting the finances to help with the rebuilding of our home."

Persons wishing to assist Asheki Spooner may contact her at 876-596-6619 or may donate to: National Commercial Bank A/C#: 894271167, Santa Cruz branch, in the name: Asheki Spooner or https://www.gofundme.com/f/help-asheki-jacqui-rebuild-their-home?member=...