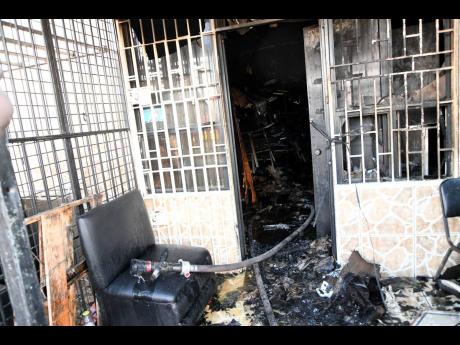 Owners of auto-parts businesses Best Radiator and Twin Radiator are now counting their losses after fire damaged the store at Bronstorph Square yesterday. 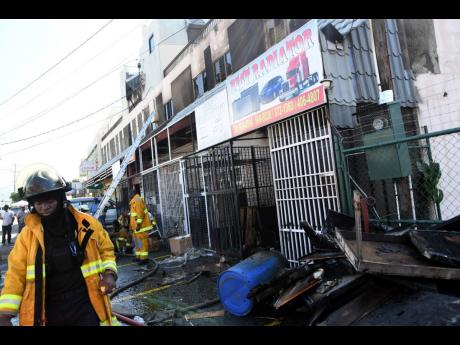 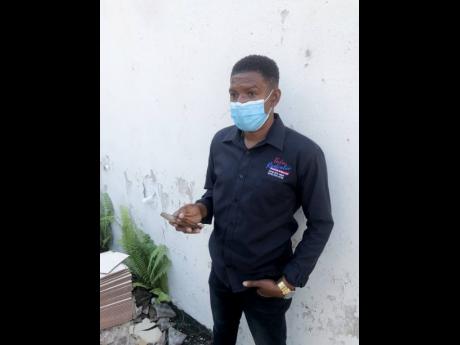 Roberto Howell contemplates his next move.
1
2
3

Twins Ricardo and Roberto Howell watched helplessly as firefighters dosed a massive blaze at their auto-parts store in the Bronstorph Square building on the Washington Boulevard near the Rubis gas station.

Roberto shared that the store, which was handed down to them by their father, Simpson Howell, had been in operation for the past 35 years.

The businesses, Best Radiator and Twin Radiator, supply and repair radiators and accessories for various vehicles, including trucks and heavy-duty equipment. They also stock plastic tanks.

Best Radiator focuses on repair and construction of radiators, while Twin Radiator is involved in the sale of the radiators.

"When me come and see the fire this morning, me kind of shake up, all now me nuh come to my senses. A di first me a see something like this," Roberto, 37, said as firemen fought the blaze.

The businessman said that he received a distressed call from Ricardo some minutes after 7 a.m. yesterday to relay the unfortunate news.

"I just drop my daughter at school and I was coming back and I see a fire truck. I thought it was one of the cars burning so when I come and saw the smoke upstairs, that's when I realise that it was our shop burning. A lot of stuff was going through my mind at that time because it is a lot of millions inside," Roberto shared.

The damage is said to be in the region of $40 million. Roberto said that the business was not insured.

"Is just last week an insurance lady come to me and I say 'alright next week I'm going to insure the place' and you see, a better we did just do it," Roberto said.

"We just ago get some cash together and try to recover, get the business up and running, hopefully, by next week. We still have some stock upstairs and get some other stuff," the businessman said.

Meanwhile, assistant commissioner in charge of Area 1, Alrick Hacker, told THE STAR that firefighters received a call alerting them to the blaze at 7:59 a.m. He said that the teams responded promptly, however, they had difficulty accessing the premises.

"Access to the fire was a bit difficult due to high pillage of storage in the restricted space. However, firefighters managed to get the fire under control and prevented it from spreading to the other shops" Hacker said.

The cause of the fire was not ascertained up to press time yesterday.