Young farmer fulfilling his ‘destiny’ to till the soil 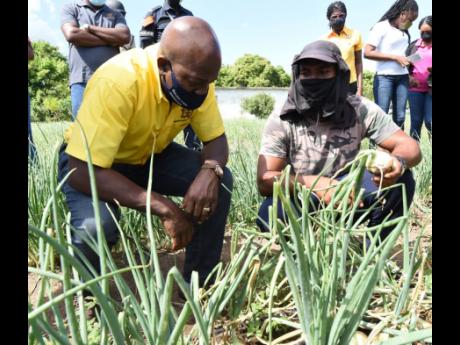 Pearnel Charles Jr (left), minister of agriculture and fisheries, get tips on how onions grow from Lawrence Lynch, an onion farmer in Albion, St Thomas. Charles was on a tour of several farms to get an understanding of the level of food prodution in St Thomas. 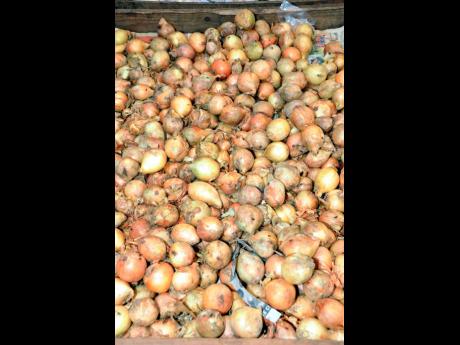 A deep conversation with his grandfather, who was on his dying bed in 2013, catapulted Lawrence Lynch of Heartese in St Thomas, into what he believes to be his destiny, a life in agriculture.

Looking over some five acres of land bursting with fresh onions, the now 33-year-old large-scale farmer is content that his late granddad would be 'super proud' of him.

"I should have gone to nursing school but when I went to the hospital to look for my grandfather he said all his life he has done farming, he has fed his 13 children from it, he has a home, lands and cattle," Lynch said.

There in the hospital, the wise man instilled in his grandson the popular adage which states that food is the staff of life.

Lynch continued "He said I can have everything in the world that I want if I give everybody what they want. I asked papa what he meant by that and he said if you can provide all the food that people want, they will in turn give you the money that you want."

The ambitious farmer, who initially started out on one acre of land, told THE STAR that like his grandfather, his craft has been sufficiently providing for his wife and two children over the past few years.

"I do not do anything else but the farming. It's my business and when it's anniversary time I can still book a hotel just like anybody else and pay our insurance policies. We enjoy our lives and the freedom it offers. I work very hard for six months and the rest I can take an ease. We are in the process of making our home and with a crop like this, God's willing, we may be able to fulfil this desire before the end of the year," he proudly shared.

Expressing gratitude to the Rural Agricultural Development Authority (RADA), the Agricultural Commodities Programme and the agriculture ministry for their support, the young farmer continued "[They] came out here and equipped us with knowledge and how to apply the practices on the farm. RADA has been supporting us over the years with seeds and technical advice on how to handle chemicals because at the end of the day, while we are feeding the nation, we have to protect ourselves."

Lynch was among the first set of farmers visited by Pearnel Charles Jr in his new role as agriculture minister. Charles Jr, who led a tour of onion farms in western St Thomas, hailed him as a 'shining example' to others, especially youth who are looking for a way out.

"We could not ask for a better story to invite and encourage all Jamaicans to get involved in farming and fisheries... a story that shows that with hard work and determination and little support from the Government, you can make it in Jamaica," Charles Jr said. "Coming out of this pandemic, there is going to be a lot of opportunities and the opportunity for Jamaica is farming. Every household must eat... and the global market is demanding Jamaican food so we have an opportunity for farmers to increase productivity."