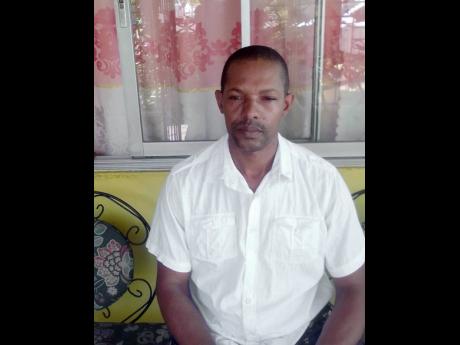 A man who suddenly lost his sight two years ago is still searching for answers despite getting a diagnosis from doctors.

Spanish Town, St Catherine resident Heron Simpson, who is a plumber, says that he had perfect vision but suddenly on December 27, 2019, he lost his sight in the blink of an eye.

"I went to do some work and I got paid and about 15 minutes after I pay out the workers, I just went blind. I just couldn't see at all and I was taken to KPH [Kingston Public Hospital] but the doctors said they didn't see anything wrong with my eyes, so they refer me to UHWI [University Hospital of the West Indies] where they did a series of tests and said both of my retinas were torn and I needed an emergency surgery," he said.

The 47-year-old said that he was told that his blindness was caused from an injury he received to his neck. But he refutes this diagnosis.

"Nobody never lick mi in my neck or anything. No one hit me," he said. Simpson said he did surgery in February 2020 and was supposed to do another one within three to six months.

"But COVID came and it never get to do," he said. Simpson said that he regained the vision in his left eye but in January 2021, the eye became swollen again. He said that he is still perplexed, as some persons are convinced that the ailment is not caused by a medical issue.

"I go to a revival church and they told me that it didn't just happen like that but the matter can be resolved medically. I really don't know what to think, but I just want my vision back," he said. He is currently in need of approximately $450,000 to undergo an operation to rectify the situation on February 15 and is reaching out to the public for financial assistance. This is inclusive of $161,000 that he owes to the medical facility following a previous surgery.

"I would be appreciative of whatever assistance I can get. I am not a lazy man. I am usually very independent but this has set me back a whole lot. The doctors had placed oil behind my eye as a treatment, so there are times when it will run out if I hold my head down. I can barely see anything. I tried working back the other day and tried to do some plumbing, but it never worked out because I couldn't see properly and I couldn't hold my head down for too long," he said.