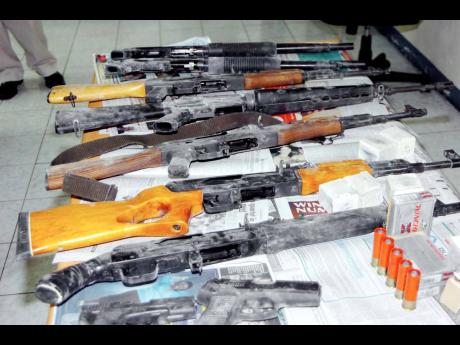 Crime Stop Jamaica says that it has seen a significant increase in the number of persons calling its office to give information about illegal firearms since the start of 2022.

The unit says it has received 130 tips, the majority of them for illegal firearms, with 41 of them inside the first eight days of February. Last February there were 61 tips for the entire month. Crime Stop, since its inception 32 years ago, has received 30,101 tips and paid out over J$55 million in rewards.

Jamaica, for years, has struggled to contain its homicide rate which, at 43.8 per 100,00, is one of the most murderous per capita ratings globally. However, according to Cherise Bruce-Douglas, manager at Crime Stop, the 2022 figures show that Jamaicans are fed up with the spiralling murder rate and are now playing their part in the fight against crime and violence.

"The pertinent information that we are getting, and mind you that has never stopped, even if there was a decrease in 2020 and 2021, but it is showing me that persons are getting frustrated, especially with the barrage of murders that we are seeing in the press, and it [the tips] are not only on illegal firearms. It is about wanted men and suspicious activities in their communities. Persons are just taking the stand that they want to have a safer community," she said.

Bruce-Douglas says that Crime Stop boasts a one in five success rate, that is for every five calls, at least one crime was solved. But Bruce-Douglas believes the numbers could be significantly higher if more Jamaicans were to allow themselves to trust the integrity of the programme.

"I encourage each citizen to take a stand against criminality within their communities. It is our responsibility, each of us, to protect our families and our home. If you know something, say something. Far too often we use the excuse of not trusting the police. We really don't know who our sources are, even up to the stage of reward payment. Therefore, I appeal to each citizen, if you know where an illegal gun is hidden, where a wanted person is located, or any information regarding criminal activities, call 311 at any hour of the day," she said.