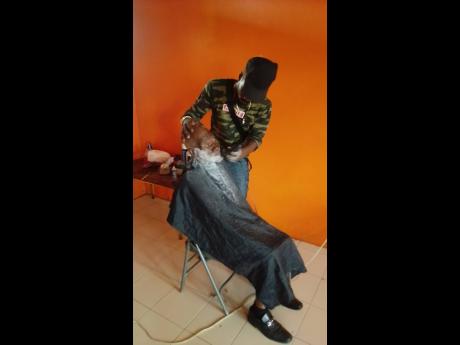 The eighty-two-year-old Charles Lewis gets his hair trimmed by barber Andre Black.

One hundred senior citizens were pampered on Wednesday at the Waterford Community Centre.

The event was being held for the fourth year. Seniors were transported from their homes and given an opportunity to relax with other members of the community, eat, listen to 'soft' music and treated to total pampering. Females were given pedicures and manicures and had their hair washed, dried and styled, while males were trimmed and shaved.

Waterford councillor Fenley Douglas, who sponsored the event, described the gesture as 'pampering volume four', and was executed with the help of the community's younger residents.

"For me, this is giving back something to our seniors who have been tireless in shaping our lives, oftentimes at their own expense," Douglas said. "I believe that Jamaica has taken a turn where we are not doing enough for our seniors. We have marginalised them and I must say that whatever we are enjoying as young people is because of the seniors and the seeds they have planted why we are successful today."

According to Douglas, it is also a way of showing love in a community that has a proclivity for flare-ups. He described the appreciation from the community as overwhelming. Andre Black, a young barber who has been doing the trade for about eight years, said that when he was asked to get involved, he didn't hesitate.

"I volunteered to show my support and to give the elderly a strength. They cared for us, so I think it is right that we care for them in return," he said.

One of the elders who was feted, Charles Lewis, was very excited by the prospects of getting trimmed and shaved while just being around other seniors he had not seen for some time.

"This is good, I appreciate this very much," he said.

Violet Henry, who had her pedicure done by cosmetologist Rosie Howell, was cheerful about being pampered. She said that it was a good feeling just to be hanging out with other residents and getting her feet done. "This would have cost me a fortune if I had to go elsewhere," she stated.