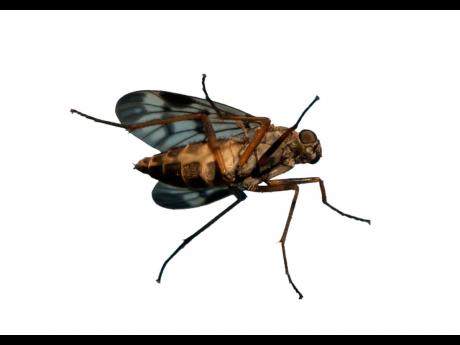 Jamaica could turn to the farming of flies as a sustainable source of feed for animals such as chickens and fish.

The Food and Agriculture Organization (FAO), a specialised agency of the United Nations that leads international efforts to defeat hunger and improve nutrition and food security, announced this week that it will be partnering with Fera Science Limited, and The University of the West Indies to develop a regional pilot project to showcase the value of insect farming.

During the pilot, according to the FAO, researchers will focus on farming the black soldier fly. The farming of these flies is set to begin by mid-year.

"The pilot project will engage farmers, communities, ministries and a range of private sector partners to create a best practice for future insect farmers. It will also create a community solution to reducing wastes and creating an affordable, sustainable animal feed," Damian Malins, from Fera Science Limited, said.

The black soldier fly larvae is the main insect to be farmed. The fly, which is present in Jamaica, is regarded as one of nature's recyclers as it rapidly consumes waste and turns it into larvae that are enjoyed by chickens and fish as a natural feed. The larvae is a developing insect in its first stage after coming out of the egg.

The FAO said that it recently completed a survey of organic waste across Barbados, Jamaica, Grenada, and Trinidad and Tobago. It said that waste materials identified in the study could sustain the growth of enough insects to achieve 50 per cent inclusion into poultry feed for the entire poultry population in the four countries.

Renata Clarke, FAO Caribbean sub-regional coordinator, said that the farming of flies could lead to a reduction in the reliance on tonnes of soy and other costly sources of protein for fish and poultry feed. The FAO said that rising costs and limited access to high quality animal feeds are constraining factors for the development of the poultry and livestock sectors in the Caribbean and a threat to food security in the region.

Dione Newell, a local entomologist, told THE WEEKEND STAR that she was unaware of the insect farming plans. She, however, said that the insect being considered -- the black soldier fly -- is different from houseflies.

The black soldier fly lays about 200 eggs at a time.