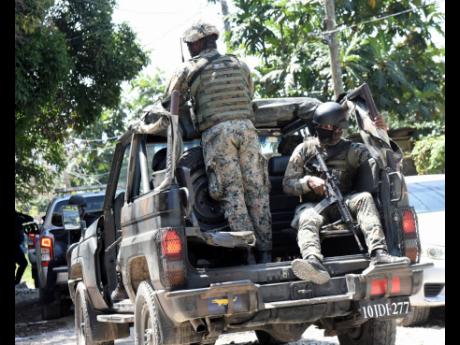 Members of the Jamaica Defence Force in sections of east Kingston yesterday during a pre-dawn operation.

One of them has been identified as Richard 'Bob' Higgins, who was posted on the Jamaica Constabulary Force's 'Wanted Wednesdays' campaign. Higgins and the other man were among 25 men arrested during the operation. According to police reports, the lawmen were targeting guns, gunmen and gangs to disrupt criminal activities within the space. The police stated that Higgins, who was wanted for shooting, was captured despite changing his complexion multiple times.

No firearms or ammunition were found during the approximately seven-hour raid and one resident said that she is not surprised as the young men in the community do not 'act up' unless they are provoked.

"If no one nuh trouble the youth dem here, nuh shot nuh fire. Dem youth here nice and respect everybody. Down to the dog dem the man dem rate. Yuh can't trouble all a madman up in these parts and nuh man cannot beat dem. No man or no girl can fight. Is order run around these place, suh nuh gun not up here. A peace and love we deal with," one woman said.

Another woman, whose house was searched during the operation, said that her mentally challenged son was arrested but she is confident that he will be released without charge.

"Dem come inna my house early in a di morning and mi blood dem up with the blood of Jesus. Dem ask mi why mi a call on Jesus and a ask who and mi in di house. Mi give dem di name of all mi children and call one a dem by him pet name and dem ask mi why mi call him suh and mi tell dem say a suh mi call him from the day him [born]," the woman said.

Another woman said she was awakened by a light shining through her window accompanied by knocking. She said she initially thought it was someone she knew but realised that it was a group of members of the security forces.

"Is about after 4 mi hear di knocking on mi door, den mi see a light a shine in di house and mi a wonder a what that. When mi open the door and mi eyes get use to the light is about 10 rifle mi look up inna. Dem go way with a lot of men, some of dem a mad people. Is dem work dem a do so mi allow dem fi do what dem a do," she said.