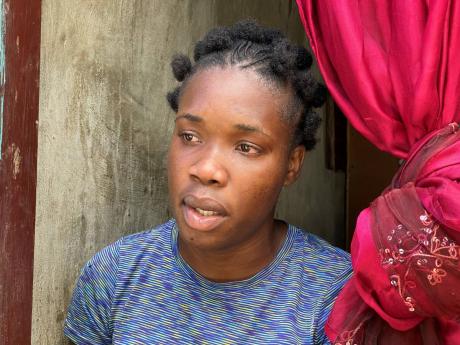 St Thomas resident Shanice Francis, 21, is hoping for an opportunity to turn her life around.

The telltale signs of regret flooded the face of 21-year-old Shanice Francis as she reflected on the limitations of her current lifestyle, which she believes are as a result of the way in which she played the hand she was dealt in life.

The mother, who shares a bed with her one-year-old son, just centimetres away from another bed which her grandmother occupies, told THE STAR that she is desperately in need of her own space.

The structure which, she shared, belongs to her mother, who resides elsewhere, is sectioned into two small rooms, the other of which is occupied by her sister-in-law and nephew.

Sitting at the doorstep while her son napped peacefully behind her, Francis, who resides on Morant Road in St Thomas, wept as she considered her state.

"I got pregnant and I was not prepared for a child. Mi bawl out murder when I found out, but I decided that I wasn't going to throw it away because I didn't want to mash up myself," she said.

The unemployed mother of one admitted that she has seen many hungry days, but has always tried her best to ensure that her baby is fed, even if it means "trusting Lasco to mix or Irish fi crush give him".

With tears streaming down her cheeks, she said, "I feel very bad when he is hungry and I have nothing. My grandmother and I haven't eaten from morning, but my baby got something. Sometimes I cry about it, and all sort of things come in my head, but I ask God to help me."

She revealed that although the father of her child contributes when he can, she is often treated with disrespect when she makes requests.

Francis told THE STAR that it is not the lack of trying why she is currently unemployed. She said that she is able to carry out many functions, but has been unsuccessful in her bids for jobs.

She also shared that she is a part of a National Youth Service Programme to extend her skill set, but has been finding it hard to work as a volunteer due to her needs.

It is her hope that a few Good Samaritans will sponsor her dream to be her own boss.

"Right now, I do a little washing for people and I'm grateful, but that's not what I want out of life," she said, adding that with the necessary help she will be able to establish a small shop.

Francis fought through tears to share a word of encouragement to younger girls. "Take in your education. Nuh bother think about boyfriend and 'skull' school to go man yard, because it won't work out when you 'catch belly'. I never skulled school, I have three subjects. My mother gave me what she could and I am grateful. Mi just shouldn't get pregnant yet."

Seventy-four-year-old Sybil Bingham, who was in earshot of Francis, admitted that she regrets seeing her granddaughter in distress.

"I don't feel good about the situation. I don't want her to come [reach] my age and don't own something. I would want life to be better for them," she said.

In the same breath, Bingham shared that she has needs of her own.

"Is cotch mi cotching in my daughter house, too, and would like a little house for myself, so I can have my privacy," she said, noting that applications were made to Food For The Poor with hopes of securing individual houses.