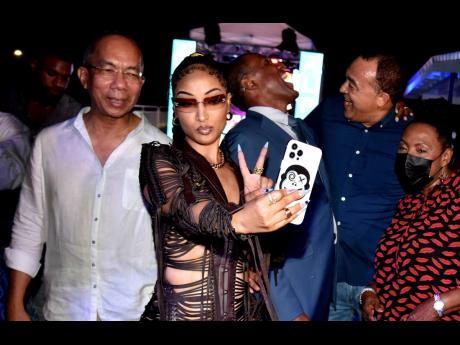 National Security Minister Dr Horace Chang yesterday refused to take any question from the media on whether he was in breach of the Disaster Risk Management Act (DRMA) when he attended the launch party for Shenseea's album, Alpha, on Tuesday night.

Chang, who is also the deputy prime minister, was among five cabinet members at the event. The others are Olivia 'Babsy' Grange, the minister of culture, gender and entertainment, Dr Nigel Clarke, who heads the finance ministry, Health Minister Dr Christopher Tufton, and Floyd Green, minister without portfolio in the Office of the Prime Minister.

Opposition lawmaker Lisa Hanna was also at the event.

With the exception on Grange, non of the government officials wore mask, an offence under the DRMA for which persons have been fined up to $200,000.

The double standard has not escaped the attention of many Jamaicans. For instance, Robert Finzi-Smith, a security expert, told THE STAR that with the restriction of public gathering, mask wearing is still in effect, the parliamentarians, albeit lending support to the entertainment sector, appear to be in breach of the rules.

"l would imagine that people who have been financially put out of sorts, by being caught in public without accompanying mask, wouldn't be pleased to see the head of the National Security doing openly what they would have been charged for," Finzi-Smith said.

"Perhaps the minister is aware of a relaxation of the protocols that we are not aware of," he said.

Yesterday, Chang, who was attending the opening ceremony for the renovated Franklyn Town Police Station in Kingston, ducked questions when the issue was raised. Members of the media were told by his handlers that he would not be answering questions relating to his appearance at the event, and was whisked away after the news team began asking him about the matter.

It is widely expected that Prime Minister Andrew Holness, who last month signalled that there would be a "widening of the guard rails to allow more economic activity", will announce a lifting of the ban on entertainment events when he speaks during the Budget Debate today. There could also be further relaxation of measures that have been imposed under the DRMA.