Evicted sugar worker gets a house at last 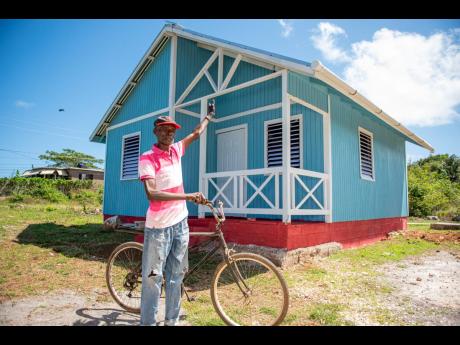 Vincent Richards, a retired sugar worker, was evicted from the sugar estate that he called home for years.

After years of driving tractor in Long Pond, Trelawny, Richards , 73, thought that he would have been able to live out his days in his home. But 10 years after his retirement, that feeling of security was shattered when he got the news that he had to leave.

Richards and his fellow sugar workers who were evicted were left bewildered. He knew he could not pay rent for an extended period. Yet, he decided, with no other option, he was going to give it his best shot.

"I was living in the estate house but when I retire, they tell me they want the house. I had to struggle and rent a room. It rough but I had to fight the war," he said.

The father of five, who has the responsibility of schooling his last child to university, he rented a room for $4,000 per month. Though not a large sum, with a small pension and PATH contributions from the Government as his sole sources of income, the rent proved too high.

Luckily, Richards owned land in a housing scheme in the parish. He bought the land from the $10,000 a fortnight salary that he earned while working at the sugar estate. He was determined to make his land work for him, but he had no money to build a house. Desperate for a comfortable place to call home, Richards reached out to Food For The Poor (FFP), and the charitable organisation answered the call.

Last Thursday, the retired sugar worker was handed the key to his home in Spicy Hill, Trelawny. The two-bedroom board house is fitted with a water harvesting system, collects water from the rainfall, and a solar panel that powers the electrical lights.

"Now, I'm comfortable, nobody to molest me about them rent and my family come every day, if they don't see me," Richards said.

"When you have your own, you have to love it ... I can live here," said Richards, who is one of four recipients who were gifted a house this month.

BOOM Energy Drink, the sponsor for the homes, has committed to helping 10 families realise their dreams of owning a home this year.