‘Omar should a never dead like that’ - Teen killed by mentally challenged uncle described as helpful, jovial 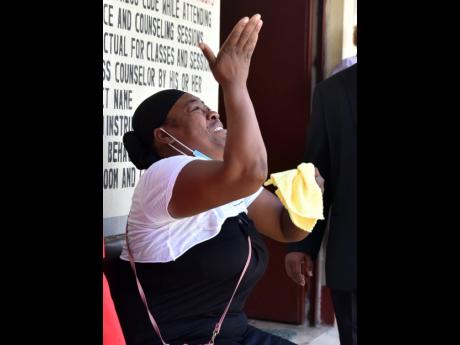 Photos by Kenyon Hemans Sherry-Ann Williams was overcome with emotions as she recalled how her cousin thirteen-year-old Omarion Haniford was killed. 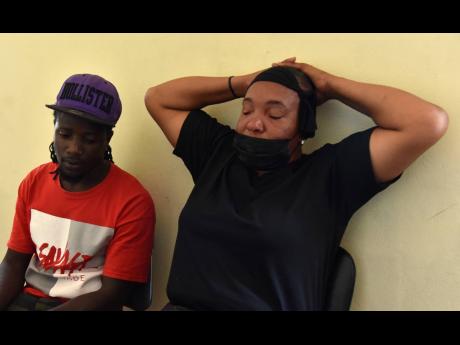 Photos by Kenyon Hemans Omarion’s parents Fitzroy Haniford and Morena Taylor grieve for their son at his school on Monday. 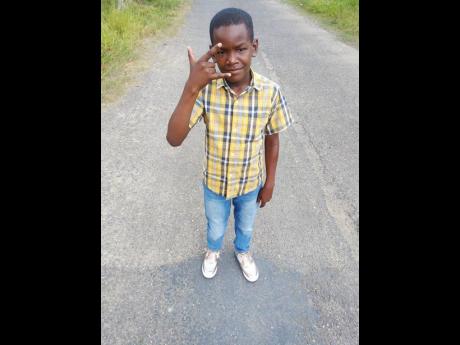 Fitzroy Haniford and Morena Taylor are struggling to come to terms with the death of their 13-year-old son Omarion, who was reportedly stabbed by his mentally challenged uncle on Sunday morning in Crofts Hill, Clarendon.

The police say about 8:45 a.m., Omarion was at home when his uncle took a ratchet knife and stabbed him in the neck during a dispute. Omarion ran from the house and collapsed in the yard. The police were summoned and Omarion was taken to the hospital where he was pronounced dead. On Monday, Omarion's father had few words, still dumbfounded by the grief that had befallen his family. Not only is his son dead, but his brother is now in police custody.

"Me turn fool," Haniford told THE STAR. Describing his son as being very respectful, the grief-stricken father said Omarion was his protege, always assisting him with work. "Any time me have work fe get done, me just call pan Omar. Omar always di deh fe help mi out," shared Haniford, adding that they also spent a lot of time farming together. Taylor was overcome with grief when she spoke with the news team. She related that her son had gone back inside the house to retrieve a shopping bag when he was attacked.

"In a split second I hear Omarion bawl out, 'Mommy, mi dead!' Nothing else. Bare blood," Taylor said. She said that Omarion ran from the house and collapsed near his grandmother's house.

The grim sight of her son's body with a stab would to the neck will be etched in Taylor's mind forever.

"Omar should a never dead like that. Omar is only 13 years old. Him nuh live nuh life. Him nuh do nobody nutten," she cried, adding that her son was well-mannered and helpful.

Omarion, was a grade eight student at Kellits High School in the parish. A sombre mood blanketed the atmosphere at the institution on Monday. Omarion was the elder of two children for his parents. They, among other relatives, gathered at the school where they were engaged in grief counselling sessions.

Omarion's form teacher Taneca Stewart-Green repeatedly watched a video she captured of him last Monday in which he was making funny faces. Unbeknown to her, it would be the last footage of him in his usual jovial demeanour. The emotional teacher shared that she was jolted by the reality of her student's death when she entered the classroom on Monday morning. "Omarion was a very jovial person. He was the firecracker of the class. Omarion will be greatly missed by all of us. Some of his classmates are not taking it well," said Stewart-Green.

Texal Christie, the school principal, said the school community is in shock and mourning.

"We've never experienced anything like this. This morning we came, the mood was a bit sombre," said Christie. He noted that the school has been providing counselling for students and will continue to provide support.