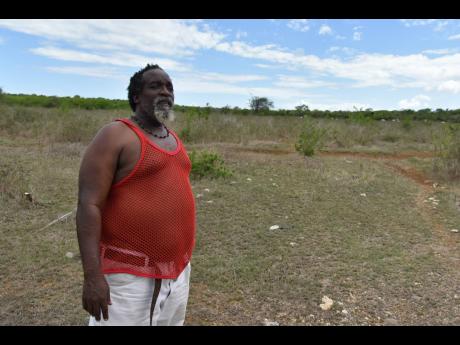 Having got lost in what he considered familiar territory, Errol Nelson wandered about in the woods for three days before reconnecting with civilisation. 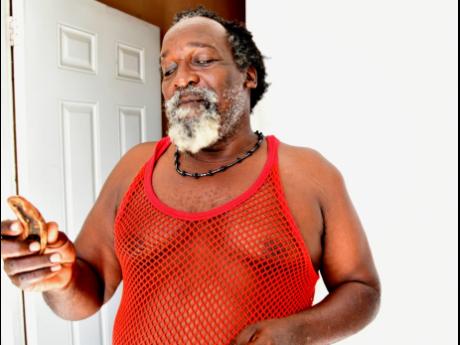 Errol Nelson shows a piece of the tree bark that he ate during the three days he was lost. 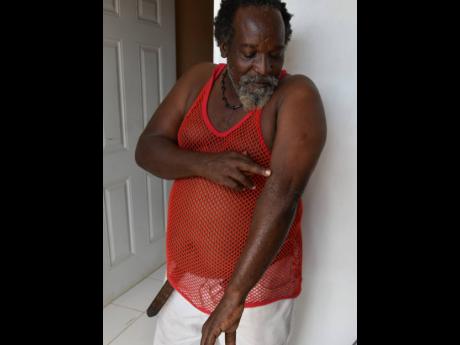 Errol Nelson was scratched by trees several times as he tried to find his way out of the woods in Clarendon. 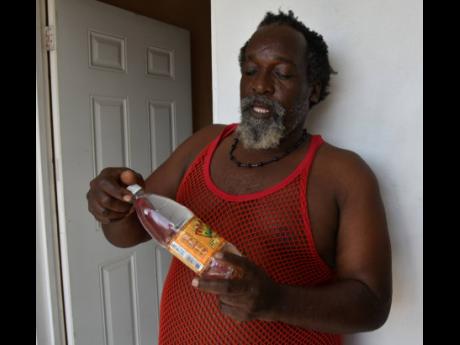 Errol Nelson shows one of the bottles he filled with water that he discovered while being lost in the woods. 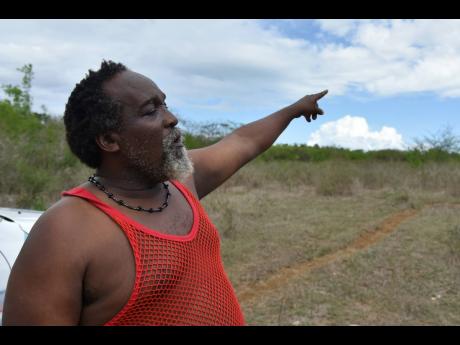 Errol Nelson points in the direction of the wooded area in which he was lost for three days.
1
2
3
4
5

Lost in the woods for three days, a Clarendon man said that he had no choice but to eat lizard, tree roots and drink smelly water in order to survive.

The man, 57-year-old Errol Nelson, said that he left his house in Savannah Cross, Clarendon, and ventured into the woods in search of ingredients for the roots drinks that he makes.

Recounting the bizarre details to THE WEEKEND STAR, Nelson said that when he left his home he intended to be away for no longer than a few hours, but his journey turned into a nightmare when he got lost in familiar territory.

He had made the trip to gather strong back and bassida in the woodlands, located at the back of Savanna Cross before, but his outing on Friday, March 25 proved to be nerve-racking. After finding the roots and barks that he had gone in search of, Nelson said that he decided to sit back and play some games on his cell phone. He only stopped when the battery died. By this time it was about 4 p.m., and so he decided to head home.

However, he was not prepared for what would happen next as he somehow lost his bearings and began drifting deep into the woods.

"The trees seemed so similar and I ended up taking what I thought was my usual route, only to discover I was really on the wrong track. It got more confusing by the minute," Nelson told THE WEEKEND STAR.

"Mi seh, wha really happen to me inna dis place, come like a lost mi lost still. ... I can't believe that a route I was used to could turn on me like this."

He knew he was lost but said that he told himself that he could not afford to panic. Except for his machete, he had no survival kit - no matches or lighter to start a fire, no compass or watch to help provide direction, his phone was dead and he had no food. All he had was self-belief that he would work his way out of the woods.

Nelson said he finally admitted he was lost when he realised that he was seeing places in the bush that he wasn't familiar with.

"It was then I knew for sure that I was definitely on the wrong path," he recounted.

He wandered about in the woods for about two and a half hours when, out of nowhere, a sign of hope appeared. Someone was using a chainsaw to cut wood for a coal kiln. Nelson followed the sounds and was relieved when he came upon 'Coolie', a man he knew from his community.

He told him that he was lost and 'Coolie' gave him directions on how to make it back to Savannah Cross.

"Him seh him couldn't meck mi and him trod pon di road weh him a go trod because mi tiad and stress out a way, and it would a easier if mi tek di shortcut and him ride round di long cut, and we meet up back," Nelson said.

In addition to giving him instructions on how to get to the proposed meeting point, 'Coolie' gave Nelson three bottles of water and a piece of bulla cake to help fill his stomach and refresh him.

The roots man headed off, in the direction that Coolie suggested - or so he thought. He once again lost his bearings. Nelson recalled that the closest he got to meeting Coolie at the proposed point was to hear his voice in the distance. He said that Coolie, having reached the meeting place, shouted his name several times and he responded. However, he was somehow unable to navigate his way out of the woods. Coolie eventually left, and Nelson was lost and alone.

With nightfall rapidly appearing, Nelson said he had no choice but to look for somewhere to lay his head. He used his bag as a pillow and lay on the ground with his machete beside him. He figured that he would be home by the next day. He was wrong.

"I wasn't afraid, I was just anxious to get home," he said, adding that he had to keep a positive mindset and to keep believing that Yahshua would keep him safe.

Back at his home, Nelson's wife and children were panicking. It was unlike him not to return home after going on his 'roots gathering' expedition. They filed a missing person's report with the police, printed and distributed flyers with his image, and set about seeking to find him.

Coolie told his family members of the encounter in the woods. A search party was organised, but when they got to the area where Nelson was last seen, he was nowhere in sight.

The 57-year-old had drifted deeper into the woodland area closer to the Longville Park, Salt River Road area and was facing another challenge. In addition to being lost, he was hungry. The woodlands, he said, had no fruits, just trees such as logwood, macka and bassida. With his stomach growling, Nelson said that he was not prepared to starve. He saw a lizard, which he described as speckled, grabbed it and ate it.

"To be honest a survival, mi taste bud not used to it. It kinda taste unusual, but it taste like meat. I am used to eating raw cow skin, so the lizard was just like that," he said.

For beverage, he drank water, which he said was settled in a section of the ground. He said that it appeared as if wild hogs waded in it as it was smelly and murky. The taste and smell, though, was farthest from this man. All Nelson wanted to do was to make it out alright. He said that he spent all of Saturday walking through the woods, hoping for some sign of civilisation. However, as was the case on Friday, he was unable to navigate his way out. He slept in the open that night again, and it was not until Sunday afternoon that his spirit was lifted. Hope, this time around, came after he saw some high-tension electricity wires. He followed the line until he saw houses that he recognised as "the back of Longville Park". He continued walking and ended up in Salt River.

"I saw a man passing with a knapsack on his back. I told him I was in the bushes couldn't find my way home. Him buss him bag and tek out two bottles of water and him gimme a bag juice and I got back some energy," Nelson said.

He asked for a telephone call, which he placed to his son who drove to Salt River to pick him him.

"When I got home I realised the impact it had on my family. My last child, who is 26 years old, did not talk, my wife got no sleep and didn't eat a thing from Friday," he shared.