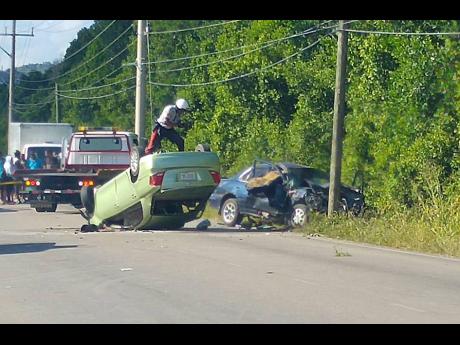 The vehicles that were involved in the February 2017 crash along the Martha Brae to Falmouth main road in Trelawny. Ten children were among the 13 persons who were injured. 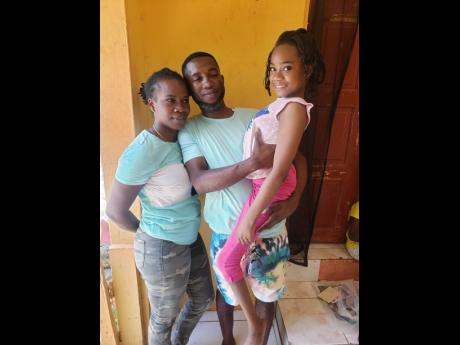 Tamara Noble relaxes in the arms of her father, Camar, while her mother, Stacy-Ann Reeves Noble, looks on. Tamara, eight, was left paralysed after the taxi in which she was travelling crashed in Trelawny five years ago.
1
2

February 17, 2017 is a date Mikail Jackson and Tamara Noble will never forget. The two children, both residents of Coopers Pen near Falmouth, Trelawny, have been left paralysed as a result of injuries sustained in a two-vehicle collision on the Martha Brae to Falmouth main road in the parish.

Mikail was nine years old at the time, and Tamara was three. They were among 13 people who got hurt in the crash.

Tamara's mother, Stacy-Ann Reeves Noble, has had to give up her job as a craft trader at the Falmouth Pier in order to care for her daughter. Now she spends time at Hague Primary, Tamara's school, where she acts as caregiver. She remembers the frightening phone call she got that Friday morning, informing her that her daughter had been taken to the hospital.

"I got the call that Tamara was in an accident and was badly injured," Reeves Noble said, while noting that she was getting ready to breastfeed her nine-month old son. "I don't know what I did with my son but I dashed out of the house, straight to the hospital," she recalled as tears welled in her eyes.

"When I saw her, blood was all over her face -- a big gash above her eye was bleeding. I started to bawl. And when she said, 'Mommy, I am not going to die', I was happy, but I bawled even more."

Tamara spent two days in hospital before being released. However, her mother was not prepared for what happened next.

"I put her to stand up and she fell. I put her up again and she fell. She said, 'Mommy, I can't feel my feet'. I took her back to the doctor who worked on her for several hours before telling me that her spine is damaged and that she won't be able to use her body from the waist down -- a nice way of telling me she is disabled," she said.

As of May 26, some 187 persons have died in road crashes, according to the Road Safety Unit. In Trelawny, there have been 11 deaths. However, the statistics do not take into account the adverse effect that crashes have had on the lives of persons like Mikail and Tamara.

Despite the setback, Tamara's education has not been adversely impacted. Damian Elvin, principal at Hague Primary School, told THE WEEKEND STAR that the Digicel Foundation installed wheelchair accessible pathways and disabled-friendly bathroom facilities, which has made life a little easier for young Tamara who has dreams of becoming a doctor.

"I am doing everything to become a doctor so I can help children like those doctors at the children's hospital in Kingston [Bustamante Hospital for Children]," she said.

Equally determined to push through, despite his disability is Mikail. Now 11 years old, he attends William Knibb Memorial High School. He wants to become a writer and a cartoonist.

"I am focussing on the arts, which will help me achieve my goals," Mikail, who is reserved, said.

Neither victim has been compensated for their life-changing injuries.