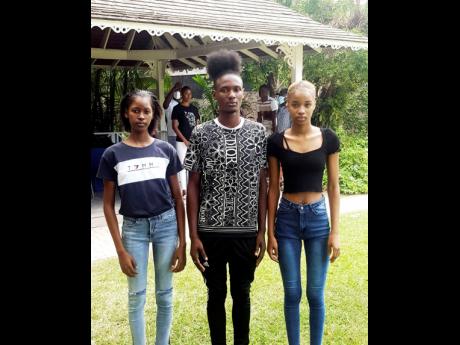 Krystal Plunkett (left), Javani Walters (centre) and Joanna-Belle Seaton were among the selected faces at the Kingston leg of SAINT’s Community Model Search. 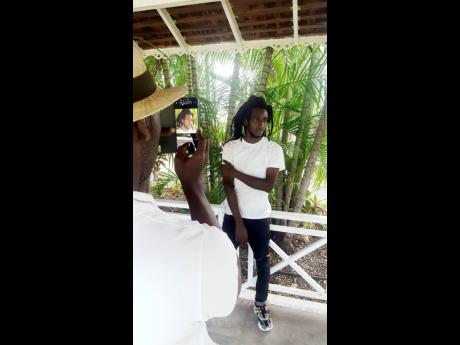 Parade Gardens resident Junior Robinson being photographed by SAINT CEO Deiwght Peters after making the cut at the Kingston edition of the model search at the Jamaica Pegasus Hotel.
1
2

Sixteen-year-old Krystal Plunkett was among the multitude of young men and women who converged on The Jamaica Pegasus hotel for SAINT International's Community Model Search last Saturday.

Accompanied by her mother and aunt, Plunkett counted among the ranks of the shortlisted 11. The fifth-form Bridgeport High School student was expectedly overjoyed.

"It feels amazing to know I was selected from the hundreds who attended. This really boosts my confidence because I always wanted to be a model," shared the teenager who calls Waterford, Portmore, St Catherine home.

SAINT International had been criss-crossing the island in search of Jamaica's next generation of supermodels. The Jamaica Pegasus stop was the last stop on the list for the Deiwght Peters-led entity.

For 24-year-old South Side, Parade Gardens, Kingston resident Junior Robinson, who was advised to test his chances at the audition by his German model friend, the result was positive.

"I did extensive research before going," the dreadlocked tour guide and crafts and oil entrepreneur said.

"Coming into the knowledge of how much of a major impact SAINT has made in the industry sparked my interest even more to try out," Robinson said.

Like many behind and in front of him in the line at Saturday's audition, 19-year-old Javani Walters had long thought that he had model potential. The Bay Farm Road, St Andrew resident, who works at Devon House in the ice cream packaging department, said he has long had dreams of becoming a supermodel.

He said that at his alma mater, Jose Marti Technical High School, "they used to have this club, Model with a Purpose, where we would train to become models in the future. We even went as far as modelling for small stores, so I always had that thing for the model industry".

Meanwhile, Peters said that the two-month search for Jamaica's next top models was successful.

"It's the biggest search I've done in some time and I discovered many fresh, promising faces," Peters said of his islandwide audition that visited St Thomas, St Mary, Clarendon, St Elizabeth, St James, and ended in Kingston.

"Jamaica is blessed with remarkably stunning model talent, perfect for the international fashion industry, and SAINT is positioning for the next generation," Peters said.