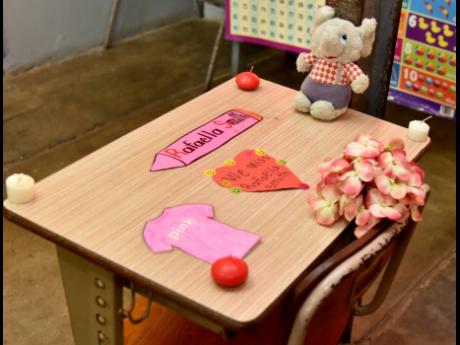 The desk and chalkboard in one of the infant classes at Beulah All Age School, where five-year-old Rafaella Smith and her 12-year-old sister Sharalee Smith attended were decorated with hearts and teddy bears in their honour. 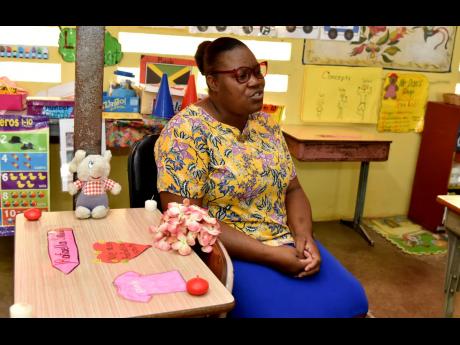 Infant teacher Tamar Blair-Robinson speaks about how the school family is coping with the murders. 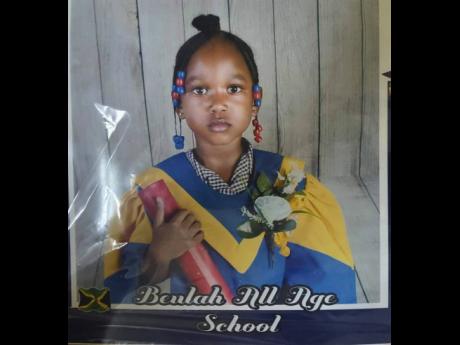 When students matriculating from the infant department of Beulah All Age School in Clarendon march during a graduation exercise next Friday, there will be an empty space where five-year-old Rafaella Smith would have been.

Rafaella was also set to collect the top-student award, but it is a milestone her teacher will never get to see. Little Rafaella, sisters Kimanda and Sharalee Smith, brother Kishawn Henry Jr and their mother Kemesha Wright, were murdered at their New Road home in Clarendon on Tuesday. The bloodbath has sent shockwaves across the island, leaving citizens feeling hurt and angry. The suspect, who is a relative, has since been taken into police custody.

A blanket of grief hung over the school on Wednesday, as staff tried to come to terms with the senseless killing. A little desk decorated with roses and candles bore testament of a sad reality. Infant teacher, Tamar Blair-Robinson, described Rafaella as a quiet and well-behaved student who excelled academically. That excellence, the teacher said, led her to recommend Rafaella to move on to grade one, despite not meeting the age requirement.

"The other day I spoke to her mom and I told her that I wanted her to graduate and she was saying, 'Miss, but she's only in the four-year-old class, how could she?' But because of how brilliant she was, I pushed her and said I want her to graduate. She went ahead and paid the graduation fee. [Rafaella] took her graduation photograph and she was on her way up to grade one," said Blair-Robinson.

"I call her my baby girl. Rafaella has my heart. To hear about her death, it took a great toll on me. I cannot come to terms to know I will never see my child again. She's just like mine. Last night I could not sleep. I heard her calling my name every minute," said Blair-Robinson as she looked on at Rafaella's empty desk.

"I don't know what to think not being able to give her her award," she said. She shared that Rafaella did her last three examinations on Monday, copping full marks in all of them.

Recounting the moment she heard of the tragedy, Blair-Robinson said she screamed.

"I was on the ground. I could not believe it. My day was just shattered. I am still in shock. I kept telling myself Rafaella will be coming to school. I kept looking out for her," she said.

The teacher said the students are fully cognisant of the tragedy and have been grieving. She shared that Rafaella's best friend has been severely affected and had to be excused from class.

Kimanda, 15, and Wright were past students of Beulah while Sharalee was in grade five. Principal Nadine Gayle-Little told THE STAR that the tragedy is a tremendous loss for the institution. Gayle-Little said the sisters exuded discipline and love.

"These are children that had the kind of home support that speaks to the kind of individuals that they were," Gayle-Little said. "They were very promising students ... very loving students, and so they got along with their peers. They were loved and that contributes to the kind of loss and grief that we're all going through."

She said the pain became unbearable for Sharalee's teacher who had to seek medical attention.

"It goes to show that we are nowhere over [the grief] ," she said, adding that the staff, however, is strengthened by the support being meted out to them.