Dewy wants a break from Queenie 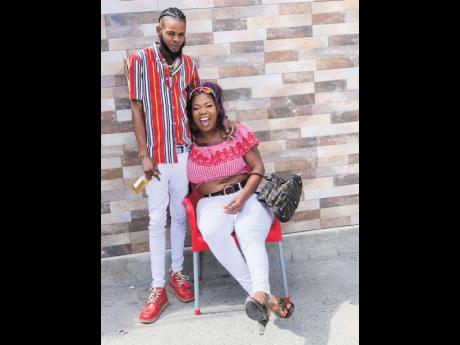 Queenie and Dewy in happier times.

Recording artiste and social media star Queenie Lady Gangsta says her husband, Duwayne 'Dewy' Scarlett, has requested a break from their 14-month-old marriage and she wishes him the best.

"Mi nah fool mi self because Dewy nah fight for the relationship, is mi alone. Him wah go back home, and him can't take the argument. He is clearly confused and don't know what him want," she said. Speaking with THE STAR yesterday from their home in the UK, Queenie said their relationship has been rocky since March after she insulted but later apologised to his mother on social media. Things got even uglier last Friday at the Gatwick International Airport in England, where the duo had a heated argument that got physical.

"We suppose to go Canada for the ninth of this month so we leave Jamaica on the 30th of June, so we had nine days to plan for it. The day before we suppose to come up, him say him nuh ready to come up and him wah stay longer. Inna mi heart, mi know mi have obligation to honour. When we deh airport, him say him a beg mi buy liquor for one of his family, and mi tell him no because him family dem nuh like mi," Queenie said. She said it was a quiet, 10-hour flight to the UK as Dewy refused to speak to her. After they landed, he made a phone call.

"Mi walk up and hear him a tell a family member say mi gone leave him and how mi nah buy nuh liquor fi him. When mi hear mi get ignorant. Suh mi say, 'Weh di b*******t yuh gone call people fa before yuh call mi,'" she said. Queenie said a shouting match started and she shoved him out of anger. The uproar caught the attention of the police, and Queenie said she was placed in handcuffs and taken away from the airport. She was released a few minutes later without being charged.

"Mi go home, and when mi reach mi see mi husband at home with the suitcase dem. All this time we never know say people a video we and a when mi reach a one show weh mi did have, a security show mi it," she said. Queenie said that Dewy got extremely upset after seeing the video and said that was when he told her that he needed a break.

"Mi tell him say I want us to turn a new page and so on, but him cold as a ice. Mi call mi family and dem come counsel we but when di counselling done, Dewy still say this wasn't for him and him don't want to be in it," she said.

Queenie met Dewy, who is 20 years her junior, while she was visiting Jamaica in August 2020. They tied the knot on March 20, 2021. Queenie said she feels Dewy didn't give the marriage a chance.

"He is leaving for foolishness, because he doesn't want to stand firm," she said, adding that despite everything, she respected Dewy, as he took the bold step to marry her.

"Mi wish him all the best, and a take it one day at a time," Queenie said.