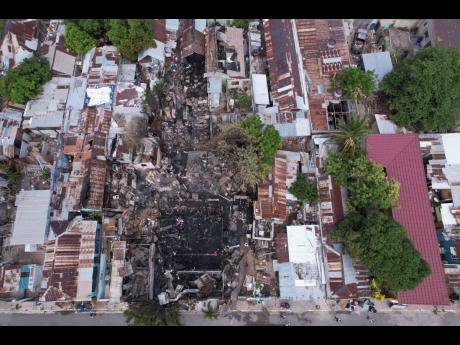 left: An aerial view of the damage to the homes. 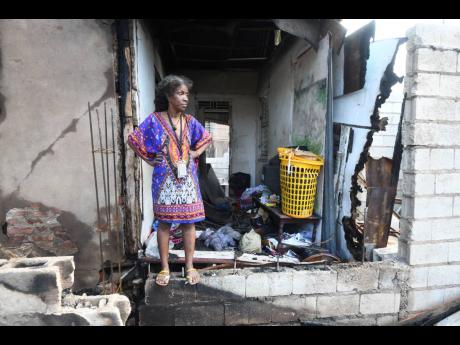 Ricardo Makyn/Chief Photo Editor A distraught Sophia Grant stands at the entrance of what remains of her home following a massive fire between Smith Lane and James Street in central Kingston. 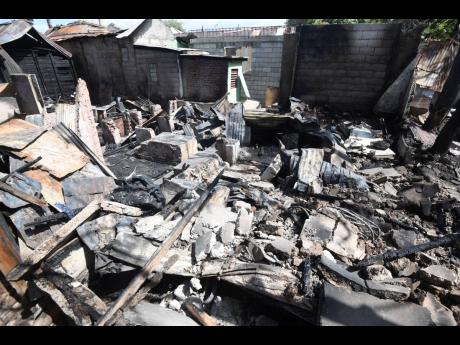 Some of the damage caused by the fire which residents said was caused by arsonists who also fired at them.
1
2
3

The tears streamed down the face of Sophia Grant as she watched her neighbours searching through the rubble of their homes that went up in flames on James Street and Smith Lane yesterday.

Standing in what was once her late son's bedroom, she wept before explaining that she is yet to get over his death and is now faced with another devastating ordeal.

"Him was 24 and had his entire life ahead of him and last year February dem stab and shot him to death. Him wasn't a troublemaker. Is big people friend him keep and him wasn't involved in any war. Him was a security guard at a school and dem stab and shot mi son fi nothing at all,"she said. Grant is one of at least 30 residents who lost their homes and belongings after their homes were firebombed in central Kingston yesterday. Residents said they were awakened in the early morning by the flames. One man, who identified himself only as Fresh, said he was left with the clothes on his back. The painter said that as the fire roared through his dwelling, he attempted to rush to the roadway but had to make a hasty retreat as gunmen fired shots wildly.

"Right now a just the clothes on mi back mi have. A just bare shot di man dem fire so nuff a we couldn't draw out nothing at all. Mi lose everything weh mi work so hard for. Mi lose all of mi tools dem so mi can't even go to work," he said. Grant said that she was in bed when she heard one of her neighbours cry out 'fire'.

"Mi jump up outta my sleep. When mi fly mi window, mi see di place a engulf inna one big dutty fire. Mi see one a di youth a try help one a we neighbour and his house burn down in the process. The house weh him a try save burn down flat too. Mi tired a dis. Is mi son weh dead friends dem come in here and start draw out the tings dem," she said. She blasted the arsonists for their actions.

"How unno fi do this man? What kinda heart yuh have? When mi see mi place a catch a fire, mi give up, enuh. When mi see di fire inna di room, mi give up and just walk go outta door. If di youth dem never help, mi would lose everything. Mi tired a it man," she added between tears.

However, Commander for the Kingston Central Police Division, Superintendent Berrisford Williams, did not confirm arson as the cause of the fire.

"It is still early in our investigations but we have not unearthed any evidence to indicate that the fire was maliciously set. Our investigations are ongoing," he said. Williams said that about 4:45 a.m., fire of unknown origin gutted several dwellings.