62 years of bliss - St Elizabeth couple reflect on their union 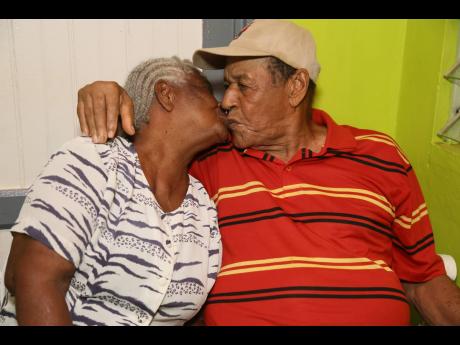 Trevor and Eunice Sherman share a ‘chuups’ at their home in Santa Cruz, St Elizabeth. 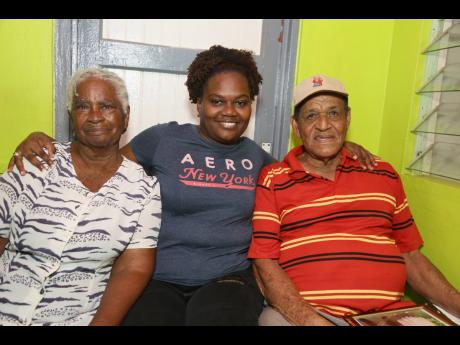 Shaneca Slowley (centre) shares a moment with her grandparents Eunice and Trevor Sherman. 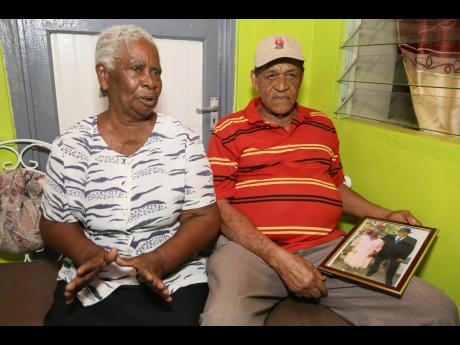 Eunice reflects on the couple’s journey as Trevor looks on.
1
2
3

"Persistence and determination alone are omnipotent," is a phrase that connotes the character of 83-year-old Trevor Sherman, who said that he was determined to marry the woman of his dreams, despite many failed attempts.

Trevor was 20 when he first laid eyes on Eunice. He told THE STAR that he started studying the then 17-year-old's routine, realising that she made regular trips to a post office in Santa Cruz, St Elizabeth. Trevor, who was a carpenter, was part of a team constructing a bank in the area. Mesmerised by Eunice's captivating beauty, he said he tried relentlessly to get her attention. Quizzed on why he persisted even though Eunice scoffed at him several times, Trevor said he knew she was bound to become his wife. The two first got together in 1960 and married on August 19, 1970. The Shermans, who spoke to the news team from their home in Santa Cruz, cited communication and unconditional love for the longevity of their marriage.

Speaking of Trevor's many futile efforts to get her attention, Eunice, 79, said, "I just pass and don't pay him nuh mind and it happened several times when I passing there and him calling to me, 'til after a while mi and him start to meet close," shared Eunice.

"She go post office and I saw her and me start throw mi likkle net and mi cast her. Mi see her and my spirit tek har. Mi [finally] approach her and tell her I love her and we planned to meet and we does meet," added Trevor with a laugh.

Eunice, who worked as a domestic helper, said Trevor started coming regularly to the gate of her place of work to see her. She said that when she was not working, they would do fun things together, including visiting clubs and their favourite spot, Lover's Leap in the parish. After a few years of dating, the couple decided they would settle down and raise a family. Their union produced nine children, the oldest is 59 and the youngest is 35. Eunice said raising nine children was no easy feat, but commended her husband as a stellar supporter and provider. Trevor said he suggested that Eunice stop working and care solely for the children, making him the sole breadwinner.

After years of working tirelessly to care and fend for their children, the couple said they are now basking in the benefits of their hard work.

"My children are good to me. All of them treat mi very nice," said Eunice. Trevor added, "The grandchildren dem too. My children grow decent. I send them to school and college and is just these 10 fingers do carpentry work. But I stop now because them taking care of me. I don't have to work."

He lauded Eunice as a decent woman, asserting that after almost seven decades together, she has only had eyes for him.

"She's a decent woman ... no run around. From mi and har start, since then, it's only been me ... no one else until now. No other man. She's a lady weh nuh fussy. She don't say she want any hairstyle or them ting deh. She nuh guh dance or dem ting deh, just home to church," he said.

"I really value them. They celebrated their anniversary in August and I'm so happy they're not ill. May they always be healthy and I'm looking forward to spending many more years with them," said Slowley.