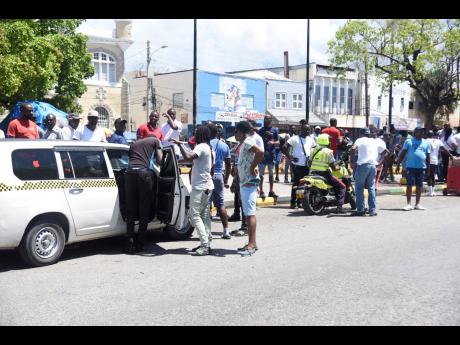 Taxi operators who terminate in the downtown Kingston area yesterday withdrew their service to press their claim for a traffic ticket amnesty. 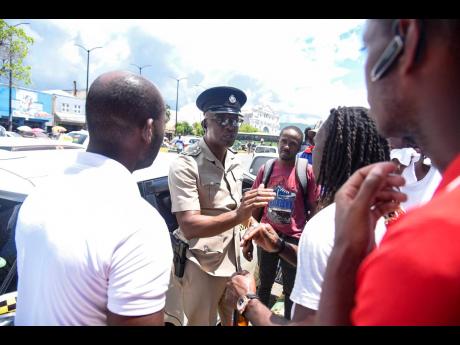 Taxi operators in the Corporate Area yesterday called on the Government to declare another traffic ticket amnesty in order for them to have outstanding citations removed from their records.

The cabbies, who yesterday withdrew their services to protest against several issues affecting them, said they risk being carted off to jail because of unpaid tickets. They allege that many of these tickets were issued unfairly.

One taxi operator, who admits to having more than 100 unpaid tickets, said that the number of tickets is not a reflection of bad driving or breaches of the Road Traffic Act.

"All when di road clear and we stop a pick up a passenger, we hear say we a obstruct traffic, or likely to obstruct traffic. So we get all four or five tickets," the operator said.

He said that cabbies would risk financial ruin if they are to comply and pay the tickets that have received.

Another taxi operator, who admits t having more than 100 outstanding tickets said that based current realities, people like him risk losing their livelihood. He said that a ticket amnesty is their best hope.

"If we go to the court to pay for them, dem a guh collect yuh money den revoke yuh licence for a year or two. We cannot renew the licence before we clear up di ticket, so we need an amnesty because taxi is our work," he added.

The Government has declared two traffic ticket amnesty in the past 10 years. In 2012, the government declared an amnesty that ran from July 1 to December 31. Some $340 million was collected by the government.

The second amnesty, which was declared in 2017, yielded some $846 million. At the time, the government said more than $2 billion in unpaid tickets were uncollected.

Under traffic amnesties, delinquent traffic-ticket holders are allowed to pay outstanding sums without the threat of prosecution, while accumulation of demerit points and warrants will be rendered null and void.

Egerton Newman, president of the Transport Operators Development Sustainable Services, told THE STA R a third amnesty is necessary at this point.

"We have been calling for an amnesty from more than the five years and the Government has refused to grant us," Newman said.

Meanwhile, in addition to the call for a traffic ticket amnesty, the pretesting taxi operators have called for designated parking to be provided for them in the downtown Kingston area.

"Sometimes the police stop us and when we ask what is the charge? They tell us it's not our concern. The taxi man dem out here need somewhere to park because we have to just drive round and drop off passenger and try pick up, and by the time police a come, everybody gone," the driver said.

" Any where we stop the police a guh ticket we, so the ticket dem just keep on a add up. Sometimes we stand up outside the vehicle and a police all come and give we seatbelt ticket, and is outside di car we stand up," the cabbie claimed.