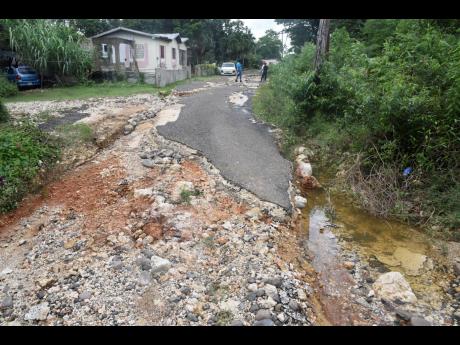 Residents say that the previously pristine Green Bottom main road has been turned into a riverbed. 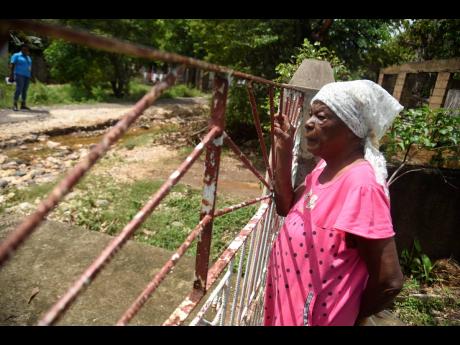 A marooned Hyacinth Rowe, a resident on Green Bottom, Clarendon, looks out from her yard. 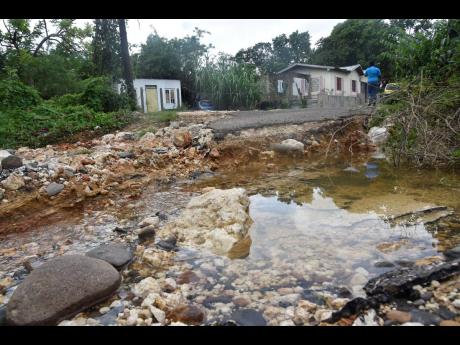 Motorists, particularly taxi operators, are reluctant to venture into the community.
1
2
3

"It's like a river" was how 88-year-old Hyacinth Rowe described the condition of her gateway in Green Bottom, Clarendon, in the aftermath of Hurricane Ian.

"Mi stay on mi verandah and look, and mi watch the water go right over to the yard next door. It then come in here and take out the garbage barrel. It was like a river, suh mi just sit and watch it. I wasn't afraid enuh, because I trust in the living God. Is mi alone live because mi husband died four months ago, but I wasn't afraid," she said.

Sections of Green Bottom are impassable to motorists due to heavy rainfall. When the news team visited the community yesterday, a few commuters were seen trying to navigate the broken roads that were still inundated. A trench, which was created by the torrential rain, was channelling water in front of Rowe's gateway. She stressed that she has been marooned behind her gates.

"Mi can't come out; and until dem fix di road, mi nah go can come out. It normally damage, but a the first the road damage so bad. Is less than two years the road fix, but marl cannot fix road. In my time, it was broken stones dem use, and hot tar," she said.

As the elderly woman looked at the shattered roadway, she smiled before declaring that despite the damage done to her gateway, she is extremely grateful that she remained safe as the rain scoured the island.

"Is my neighbour I have to send to May Pen this morning. I am still giving God thanks although I cannot pass my gate. I still have good shelter, because my house didn't leak. My son will be coming to visit me, but he will have to walk a part of the way because the car nah go can come so far," Rowe said.

A neighbour said his car was of no use to him yesterday, as he had to put on his water boots and carry his children to school on his back. Like Rowe, he said he was shocked to see the road being transformed into a riverbed.

"The entire road turn inna sea. My little car couldn't manage the breakaway dem. Taxi man nah come up here, so dem let off the passengers way out a road and turn back. Mi can't blame them because car parts expensive, and is only a four-wheel drive can take on the road," he said.

Member of Parliament for South East Clarendon Pearnel Charles Jr said a team has been deployed from his office to assess the damage in the area and make recommendations as to how they can lend support to the constituents.

"The system has not completely passed, as we are still experiencing inclement weather at this time. However our team started an assessment on Monday and will continue to make assessments and engage constituents to determine the nature and extent of damage to homes and road infrastructure," he said.