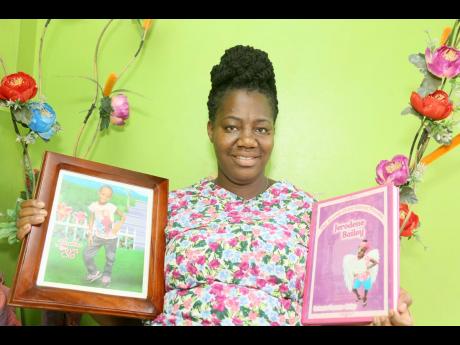 Rasheda Thomas-Bailey with a photograph of her daughter Jerodene Bailey, who was diagnosed with cancer at age four, and died at age seven. She penned her book to share her journey so as to inspire others. 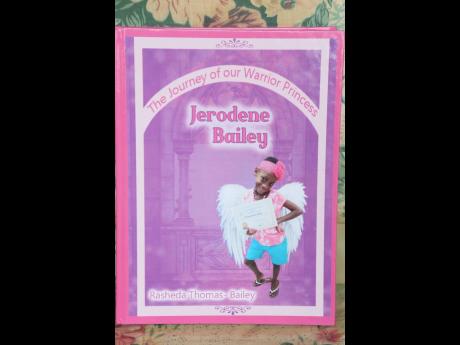 Cover of the book 'The Journey of our Warrior Princess Jerodene Bailey'.
1
2

Rasheda Thomas-Bailey is hoping to bring solace to parents who have lost children to cancer through her book, The Journey of our Warrior Princess Jerodene Bailey, in honour of her seven-year-old daughter who died from the disease in 2018.

Thomas-Bailey recalled the dreadful day in 2014 when doctors told her and her husband that their then four-year-old daughter had stage 4 rhabdomyosarcoma, also known as muscle or bone cancer.

"When we heard that news, it's like we were sleeping ... like you're in a dream and you really want somebody to shake you and say, 'wake up!' It was so emotional," she recounted.

She told THE WEEKEND STAR that Jerodene, their older child, was born healthy, and was an active child who always participated in sports day events at school. But when Jerodene began complaining of pains in her joints, they assumed she had Chik-V. She said their minds were settled when a doctor claimed that what their daughter was experiencing was muscle spasms.

"[The doctor] said 'It's something simple ... something minor. I'm just going to prescribe a Voltaren to anoint the area and she will be fine.' That we did and after a few days everything seemed to be going fine," she said.

But after noticing a lump in Jerodene's neck one morning while getting her ready for school, Thomas-Bailey was on tenterhooks. She alerted Jerodene's father who wanted a second opinion. A paediatrician referred them to the University Hospital of the West Indies where tests subsequently confirmed the devastating news. Between sighs, Thomas-Bailey shared that their once normal life became "life at the hospital" where little Jerodene spent most of her last days. She lauded her husband Jermaine as a stellar support, stating that though he too was reeling, he stood as a pillar of strength for the family.

Thomas-Bailey said that there were several low moments, but the most heartbreaking was when little Jerodene started losing her hair due to chemotherapy treatment.

"I was washing her hair one day and the majority of her hair came out in my hands. When she realised that she started losing her hair she cried. She was five. After a while it came as nothing to her so she started rocking her bald head," she said. Thomas-Bailey said a few months before Jerodene died, as she and her husband stood by her hospital bed, she asked, "Mommy, do you and daddy promise to be with me 'til the end?"

Puzzled, the mother said she inquired what she meant. The little one's response was "You and daddy already know what I'm talking about."

"I guess she saw the death that we didn't see," said the mother.

Despite the agony of losing her child, Thomas-Bailey said she finds solace that Jerodene had fulfilled her calling, citing that she had transformed and touched many lives.

"A gunman literally called me and said, 'Miss, I don't know your daughter, but your daughter has transformed my life in the most positive way. All my life I thought my gun was my only protection but your daughter has taught me otherwise. I never owned a Bible and I never saw the need to, but it's your daughter that caused me to walk into a bookstore and buy a Bible.' A lot of lives have been touched throughout Jerodene's journey," Thomas-Bailey told THE WEEKEND STAR.

She asserted that her daughter was a prayer warrior, stating that even when she was admitted in hospital, she walked around and prayed for other children. She shared that one of Jerodene's greatest wishes was to meet the fastest man alive, Usain Bolt, who visited her in hospital two weeks before her passing. Jerodene's biography is available on Amazon.

Thomas-Bailey has also started a movement on Facebook titled 'In memory of our late daughter - Jerodene Bailey our warrior princess', where she shares videos and other memories of her daughter.