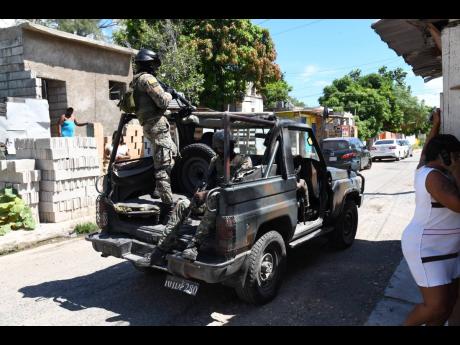 Members of the security forces patrol Third Street in Trench Town, where Corporal Oliver Mullings was gunned down on Thursday.

"Enough is enough, we tired a it," is the cry of one resident of Trench Town, St Andrew, as a war that has been raging for the past seven years has left the community dwellers frustrated.

Their cries came after the deaths of 25-year-old Shammar Fletcher and Corporal Oliver Mullings. The cop was part of a team from the Kingston Western Police Division who was reportedly shot while responding to a call about gang activities. Fletcher was reportedly one of the gunmen responsible.

The residents of Third Street, where the shooting reportedly took place, spoke with the news team under the condition of anonymity, and described the community as the 'wild wild west', as gunmen trade bullets every night, similar to the gunslinging cowboys of the past who asserted dominance of the desert.

"Me couldn't even do nothing when the shot dem ring out because my yard literally inna the crossfire. We just affi look out a we eye dem good, always deh pon yuh guard and have yuh eyes dem open. We caah live suh! We a live like a jaila, it rough," the resident stressed.

Residents argued that their community may benefit from a sense of peace, given the major operation that was conducted in the community by the security forces on October 20.

But even with that slim chance of normalcy being restored, they believe it will take great collaborative effort from the occupants of Trench Town to restore the community's pride and stability.

"This is not just about Third Street, this need the whole community. Everybody affi come together and say this affi stop. That a the only way it a go work," said one resident who has lived in the community for more than 30 years.

Residents suggest that proper gates and fences be constructed to hinder quick escapes by gunmen, who walk through the footpaths between homes.

"You affi done wid dem walk through summen deh because if a man do a crime right now him easily tek weh himself. Dem need fi build up the wall dem, make sure everybody have dem gate so nuh body can't walk through. When a man do a shooting, police affi buck him one way or another," a resident reasoned.

Children, residents said, are affected by the sporadic gunfire, causing them to miss days at school and stopping them from socialising with their friends.

They yearn for the days when their community will return to its glory days where the nightlife was lively.

"People need fi come out and talk. We cah live so nuh more, we tired a dis war. A di kids dem a feel it the most, dem nah nuh freedom fi live, dem affi a stay inna di house all the time. That nuh safe, we tired a it now," said a resident.

Senior Superintendent Michael Phipps, head of the Kingston Western Police Division, said there has been a significant reduction in murders and shootings in Trench Town.

"The lower section has recorded only two murders down from 23 for the corresponding period [in] 2021," he said. "It's just that the existence of the gangs has caused tension in the area. As such, we have ongoing targeted and snap raids, also mobile and foot patrols, and lots of intervention through our Community Safety and Security Branch from the Kingston Western Division with special focus on the gangs," Phipps said.