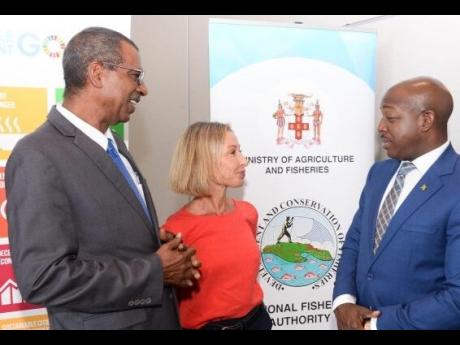 The ‘Blue Justice Initiative’ was launched Wednesday, with several agencies of government signing an agreement to support the sustainable development of the fisheries sector, through intense collaboration.

“This is big news for Jamaica. This is the kind of collective, comprehensive approach that we have to take to tackle any challenge for us at the Ministry of Agriculture and Fisheries,” said Minister Pearnel Charles Jr.

He noted that the fisheries sector represents the greatest opportunity for growth in the Ministry but pointed out that recent estimates have shown that Jamaica suffers losses of up to $200 million from IUU fishing, with significant losses from the highly lucrative conch and lobster trade.

Through the international Blue Justice initiative, support is given to developing countries in operationalising the Copenhagen Declaration, to which Jamaica became a signatory in October 2021, to promote a “sustainable and fair Blue Economy for all that is free from fisheries crime”.

Therefore, the National Fisheries Authority is now part of the Blue Justice Community, where key government officers have access to the knowledge, connection and support needed to assist government efforts to address fisheries crime.

This includes access to learning videos and key resources on aspects of fisheries crime; the establishment of a secure communication environment, and peer-to-peer interactions from experts around the world with vessel-tracking assistance from the Norwegian International Vessel Tracking Centre, run by the Norwegian Directorate of Fisheries and the Norwegian Coastal Administration.

Minister Charles also welcomed the proposal for Jamaica to be a hub for the region for the Blue Justice Initiative.

“[This] hub, with the necessary human, financial and technological resources, will undoubtedly create a platform for more effective deterrence mechanisms against the scourge of IUU and related crimes in the region,” he said.

He reassured his Norwegian Blue Justice Initiative counterparts that the Ministry of Agriculture and Fisheries remains committed to the fight against IUU fishing.

For his part, Chief Executive Officer of the National Fisheries Authority, Dr. Gavin Bellamy, said that the launch “demonstrates a step forward in improving our ability to deter IUU and organised crimes associated with the fisheries sector”.

“One agency or one Ministry [alone] can never achieve this outcome. Therefore, the ministries and agencies present here today have identified jointly the need to unite, communicate and share vital information to make our individual and collective responsibilities easier and more efficient,” he said.

Also at the signing were representatives from the Norwegian Embassy; the Major Organised Crime and Anti-Corruption Agency (MOCA); the Jamaica Customs Agency; the National Land Agency; the Japan International Cooperation Agency; the Planning Institute of Jamaica (PIOJ); the Ministry of Labour and Social Security; the Port Authority of Jamaica; the Jamaica Defence Force (JDF); the Jamaica Constabulary Force (JCF); the Passport, Immigration and Citizenship Agency (PICA); the Ministry of Foreign Affairs and Foreign Trade and other industry players.