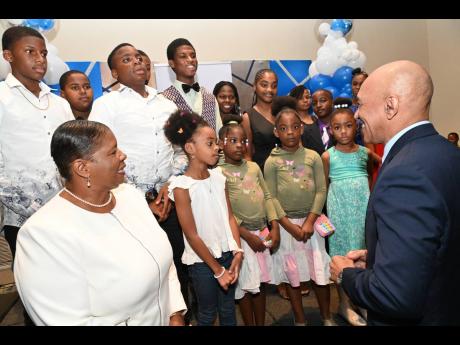 Major General Antony Anderson (right), commissioner of police, and Bobette Morgan-Simpson (left), superintendent of police in charge of St Mary, talk with the children of fallen cops who were feted at a luncheon at The Jamaica Pegasus hotel in New Kingston on Tuesday. 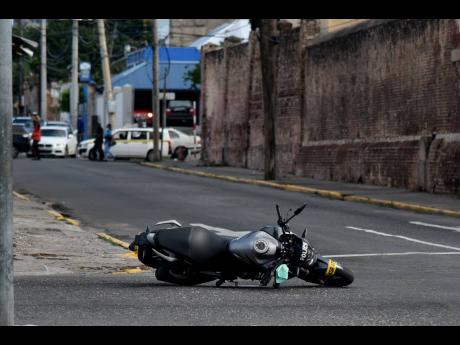 A police service motorcycle lies at the intersection of East and East Queen streets in downtown Kingston. The cop, who was driving the motorcycle, was shot and injured by cowards.
1
2

Commissioner of Police Major General Antony Anderson has expressing gratitude to the families of police officers who put themselves on the line daily to protect their country.

"I want to thank everyone one of you -- children, spouses -- I thank you on behalf of the force and the country, for lending your significant person to us," Anderson said on Tuesday.

He was speaking at a luncheon for children of fallen members of the Jamaica Constabulary Force (JCF) at The Jamaica Pegasus hotel in New Kingston.

"We know how hard it is to be without them, just watching your father, your mother, your spouse head out into danger, and most of them would not be happy doing anything else. It is a time to really celebrate those who are fallen and to also celebrate the lives they have left behind," Anderson expressed.

The top cop related a story that underscores the dedication of members of the police force to protect and serve their country. He said that on November 1 he visited a policeman who was injured by thugs near the Central Police Station in downtown Kingston and found the lawman ready and waiting to resume his duties.

"I went to the hospital, KPH (Kingston Public Hospital), and he was just coming out of X-ray and he had a bandage on his shoulder. He was sitting on a chair and I was sitting in front of him. We were speaking and he said, 'I want to hit the road again, I need to get out of here'. That was his thing, he needs to get back up," Anderson said.

"I left there and went upstairs and another one of our officers from the Quick Response Team was there, injured and the only thing he wanted to know from the doctors was, 'When can I get back on my bike with my team?,' " the police chief related.

Thirty police officers passed away during the one-year period, starting November 1 last year. Of that number, one died in the line of duty. He is Corporal Oliver Mullings.

Mullings was shot and killed on October 20, after police officers were responding to a call from residents in Third Street, Trench Town that they were being attacked by gunmen. One of the alleged gunmen was killed in the incident.

Assistant Commissioner of Police Noel Daley, who is attached to the Kingston Western Division where Mullings worked up to the time of his death, said the slain policeman was one who had an "overwhelming commitment to serve, protect and reassure."

"His commitment and passion for the job transcend the ordinary. He gave his all in service to Jamaica and then some. He paid the ultimate price in service to his country," Daley said.