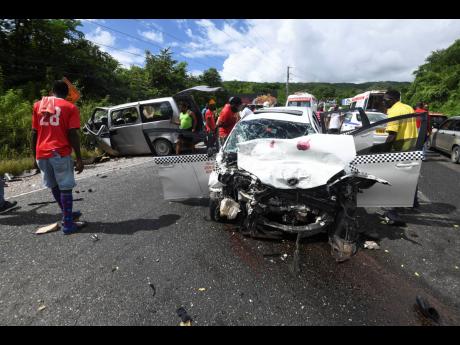 A fatal crash on the Melrose Hill Bypass in Manchester earlier this month. 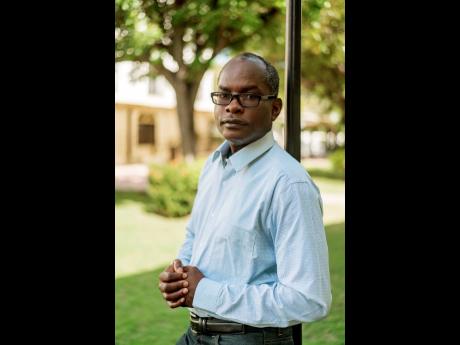 Director of the Island Traffic Authority (ITA), Kenute Hare, said he is imploring passengers to refrain from travelling with 'shotta' and 'hot-head' drivers.

While offering his condolences to the loved ones of the over 400 people who have died in road crashes this year, Hare said he was disheartened that fatalities are heading closer to 500.

"We want to appeal to passengers not to allow themselves to be transported by shotta, hot-head and hot-foot drivers. Last year, it was very bloody, especially the last 60 days, and so far it is not looking good either. Last year, 487 people dead and now we have over 425 people dead already. When you look at it, it is heights of slackness that cause it," Hare said.

Hare opined that many road deaths and injuries could have been prevented if drivers practised selfless behaviour and obeyed the traffic rules.

"Speeding and shotta driving, along with not-wearing seat belts and helmets, are what is sending people to their graves before time. Many persons are dead because of the selfish act of drivers who don't care about them," he added.

Hare also encouraged motorists with outstanding tickets to make the necessary arrangements to pay them at the court offices. Earlier this month, Hare urged delinquents to pay up before December 1. Following this announcement Hare said many motorists asked for an extension, to which the ITA has obliged. He stated that those motorists who believe that they have outstanding traffic tickets can contact the police traffic headquarters at Elletson Road or the ITA at dita@mtw.gov.jm.

"The new Road Traffic Act speaks to a lot of things concerning outstanding tickets. It must be clearly noted that there is no amnesty. So go in and pay your tickets at the court office and don't get any more," he said.

"When you get a traffic ticket, what you have basically done is shortened the lunch money and ice cream money for your children. This morning alone someone called in with over 100 tickets and I have to ask the man what he was doing on the road to get so much tickets. I told him to pay his tickets, self- reform and don't get any more," Hare added.

Hare told THE WEEKEND STAR that the ITA and JCF are joining forces to ensure that the rules and regulations governing the road network are enforced.

"Ensure that your motor vehicle is in effective condition because if it is defective, rest assured that we will issue the certificate of defect form and your licence plate will be removed. Those persons out there who tinting up their windscreens, remember that when you came to the depot and got your certificate of fitness, you did not have it tinted. So remove them or we are going to remove your plates," Hare advised.

The remote detection of traffic offences using cameras and other electronic devices will now be allowed under the new regulations which were approved in the House of Representatives on July 5. Hare said the necessary components are being worked on to have this function in operation.

"One of the biggest focus right now is electronic tickets and that is going good. The JCF is issuing E-tickets and Jamaica is working assidiously to be a great road safety nation and is in alignment with those in Sweden, UK and the Netherlands. We are working at leveraging technology in all of our operations," Hare said.