Husband hits wife for pleasuring herself 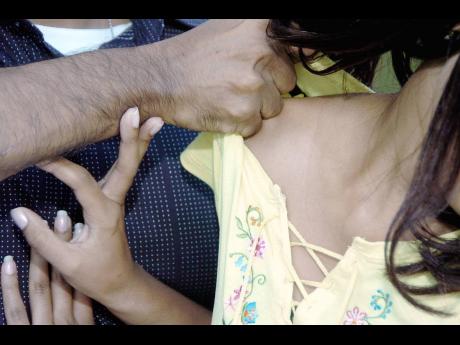 A husband who physically assaulted his wife after seeing her pleasuring herself was spared prison time when he appeared in the Kingston and St Andrew Parish Court on Thursday.

The man was ordered to pay $50,000 in compensation to his wife after she sustained bruises to her nose. The court heard that on October 28, both parties were at home when the complainant invited Smith into the bedroom for them to retire to sleep. However, the man hit the complainant in her head and head-butted her on her nose, causing bruising and swelling. He pleaded guilty to unlawful wounding and assault occasioning actual bodily harm. The complainant said that it was the first time he had hit her since they got married in March.

"We are not a bad couple. This is just frustration. I have a car that was giving me a lot of problems right from August. I came home, got something to eat, go in the cupboard and take out a bottle of rum and start drink. She order me to go to bed and I refuse and she said she was going to please herself, so I throw away whatever she was using and it (the fight) just happen from there," the man said. "Do you want this marriage ma'am? I am not forcing you," Senior Parish Judge Lori-Anne Cole-Montaque asked. However, the complainant's response was not heard.

"Have you two tried counselling?" the senior judge pressed further, to which the husband responded that it was something the couple was interested in. He paid the compensation and was later admonished and discharged by judge. - T.T.