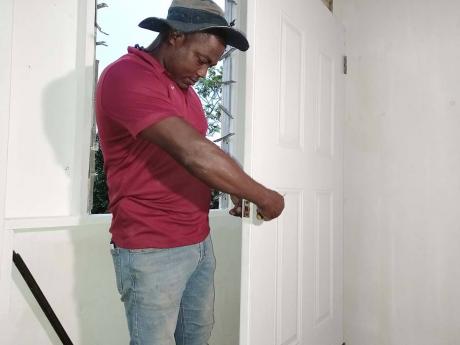 Principal of the Holmwood Technical High School, Hidran McKulsky, installing a door at the two-bedroom house built for a family of eight in Craighead, Manchester.

Volunteers built this two-bedroom house for a family in Craighead, Manchester, after their dwelling was destroyed by fire on January 8. 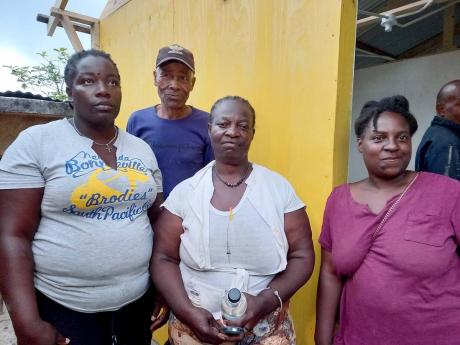 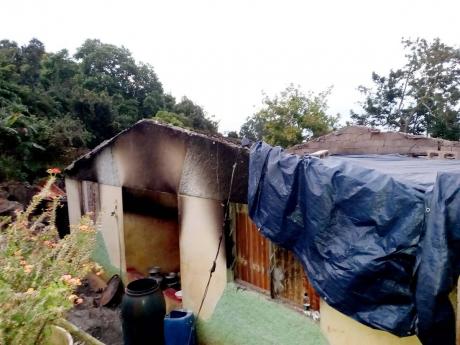 This eight-apartment house was ravaged by fire in Craighead community in the parish on January 8.
1
2
3
4

Less than two weeks after they were displaced as a result of a fire that ravaged their eight-apartment dwelling, a Manchester family of eight is thankful for a temporary, two-bedroom house and the overwhelming support they have been receiving.

The construction of the house at Craighead in the parish, spearheaded by Christiana businessman Lennox Powell and principal of Holmwood Technical School Hidran McKulsky, took approximately three days to be completed.

Community members, teachers and students also contributed to the effort.

McKulsky, noting that one of the victims attends his school, said that he along with the dean of discipline and a vice-principal visited the family last Saturday, saw their plight, and was moved to assist.

"We mobilised the support of the school board, staff, parents and students, and we were able to raise approximately 80 per cent of what it cost to build this facility," McKulsky said.

"I want to extend special thanks to staff members of Holmwood Technical High School, the parents, the teachers and the students, Mr and Mrs Swaby, George Kirby Hardware, Jones Hardware, Fuel City in Mandeville for their commitment and sponsorship. We had a number of students who came here and they were here after 12 [midnight], and that is a demonstration of commitment," McKulsky said

He added: "What I realise with this is that there are a lot of good people out there, and what it needs is leadership and persons to coordinate. Because, since we have started this, a number of persons have reached out, wanting to lend support, and we are really grateful for that."

Now that the family has received a temporary housing solution, one of the donors, Powell, is hoping that they will receive a steady flow of support as they seek to recover.

Matriarch of the family Jasmine Daley said the ordeal left them with nothing to show for their years of hard work.

"We didn't have to be here talking today, but God," she said, noting that they could have been killed in the blaze.

The house was razed by fire on January 8. It is believed that the blaze originated in an outdoor kitchen, which is situated close to the house.

"I am very glad for what they (donors) have done for me. Clothes, food to eat, and somewhere to go. I am very, very thankful for it. I hope your storeroom may never be empty and that God will keep it floating."

Daley said she continues to seek help to replace her furniture and appliances.

"I would really appreciate beds, pots, plates, washing machine, fridge, the computer for the children, dresser, blender, among other things, that would be in a home, because we lost everything," she said.