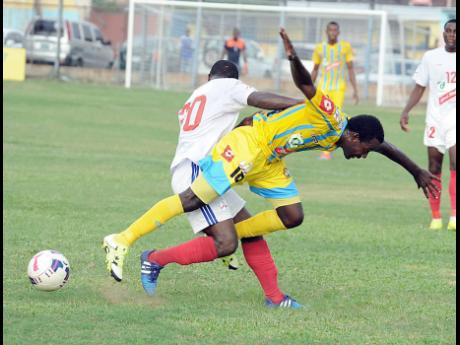 RETURNING Waterhouse Football Club coach, Anthony Patrick aims to start with a win against Cavalier in his first game back at the Waterhouse Mini Stadium tomorrow.

Patrick took over at the club on Wednesday following the resignation of Calvert Fitzgerald who had been in the post only two months.

All games start at 4 p.m., except for the UWI/Boys' Town game which begins 3:30 p.m. Arnett Gardens play Tivoli Gardens on Monday.

Waterhouse's poor record this season under Fitzgerald is well documented and the first thing Patrick, who left following controversial circumstances at the end of last season, wants to do is to lift spirits with a win in front of their demanding fans.

"That is the first and foremost thing. I made a few changes to a few things and hopefully we can get a good game come Sunday.

Although he only had three days to prepare for his first outing, he noted that he knows both teams very well.

"Looking at the (Waterhouse) team there are one or two new additions, so there are only a few new faces," he said.

"Cavalier is a very good passing team. I coached their captain Jason Watson at Bridgeport and Waterhouse, and goalkeeper Carlloyd Walters. I respect their team but we are coming for three points," he said.

In another monster clash, former Clarendon club Portmore United take on the new pride of the parish, Humble Lion, in Clarendon at Middlesex College.

MoBay and Portmore lead the table with 13 points, followed by Reno on 11, Arnett 10 and Tivoli, Humble Lion and Cavalier with eight.