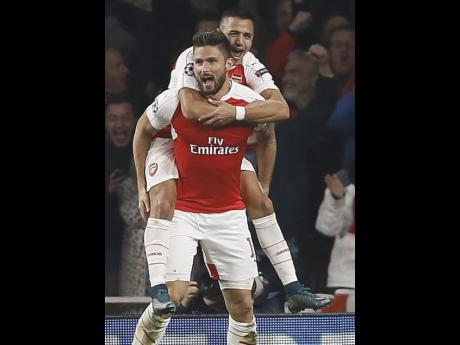 Goals from Olivier Giroud and Mesut Ozil helped Arsenal end a run of two consecutive defeats in the Champions League with a 2-0 victory over Bayern Munich yesterday.

Arsenal knew that victory in at least one of their next two matches against Bayern would be vital for advancing from Group F, and they managed to inflict a first defeat of the season on Pep Guardiola's side.

The three points gained at the Emirates Stadium puts Arsenal back in the hunt for qualification. Bayern stays top of the group, level on six points with second-place Olympiakos, which beat Dinamo Zagreb 1-0. Dinamo and fourth-place Arsenal have three points each.

"We had an absolute necessity to win the game and we did it," Arsenal manager Arsene Wenger said. "Bayern had more possession than us but we decided to make it tight in the final third and catch them on the break. I think we have beaten a very strong team. We must get a result in Munich."

Substitute Giroud gave Arsenal the lead when he bundled the ball into the net on the 77th minute, after Manuel Neuer rushed off his line and failed to claim a free-kick into the penalty area from Santi Cazorla.

Ozil sealed the win in stoppage time, converting a cross at the byline from Hector Bellerin. Neuer hooked the ball away, but only after it had crossed the line and the goal was confirmed by the fifth official.