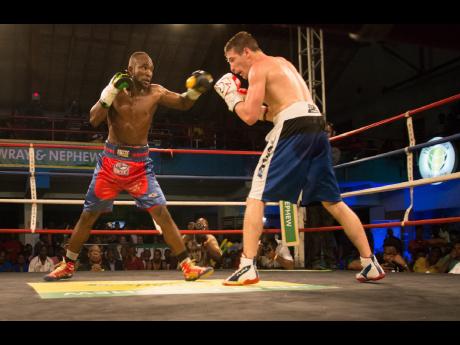 Dave Leblond (right) goes toe to toe with Tsetsi Davis during their Contender Series match at the Chinese Benevolent Association Auditorium last week. Davis won the bout on a split decision, which upset many spectators.

Tsetsi Davis' first stage Contender Series victory over Dave Leblond could be reversed if the Canadian gets a rematch by way of appeal to the Jamaica Boxing Board of Control (JBBC).

Davis defeated Leblond by split decision, which led to boos and jeers by spectators at the Chinese Benevolent Association Auditorium in last Wednesday's bout.

Leblond's trainer Patrice Trudeau had said immediately after the fight, that they could live with the decision, given Leblond gave a good showing, especially for someone out of action for over a year.

However, with one week having passed since then, Leblond now feels he was hard done by the judges.

"We hope they come to our conclusion that Dave Leblond outscored Mr Davis in that we can get maybe a cancellation or a null and void of this fight and get a rematch inside the Contender Series. We really think Dave Leblond should be the one moving on. It's quite obvious in Jamaica that everybody seems to be supporting that view. So we definitely think that the board will come to that understanding."

Star Sports spoke with JBBC officials who said, at the time, that they had not fully examined the appeal but do not expect the decision to change.

However, Contender promoter Mark Kenny said Leblond may actually have a case.

"Under WBC (World Boxing Council) rules, egregious scoring may be grounds for an appeal," he said.

"The appeal is just basically for an extra scrutiny and we're fine with that and we agree with it. Sometimes that's good to show that the show takes itself very seriously. If the appeal turns round and sanctions result that are correct? That's fine."