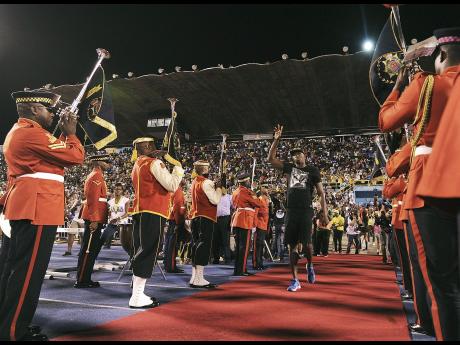 Usain Bolt is received by a guard of honour at the Racers Grand Prix at the National Stadium in Kingston, Jamaica on Saturday. 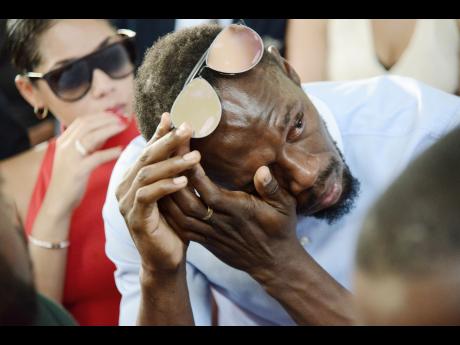 Sprint king Usain Bolt wipes away tears at the funeral of former athlete Germain Mason at the Hagley Park Seventh-day Adventist Church on Hagley Park Road in May.
1
2

Track and field legend Usain Bolt said he took two weeks off from training to help him deal with his emotions following the death of his long-time friend, Germaine Mason, in April.

Mason, the British high jumper, died in a motor cycle accident on the Palisadoes Road on April 20, and was buried on May 21.

Bolt, who ran his final race on Jamaican soil at the JN Racers Grand Prix at the National Stadium on Saturday night, said dealing with the death was hard even as he was preparing for his Jamaican swansong.

"After my friend Germaine's death, it was really hard for me. I have never been through something like this before. It took me some time to get refocused. The two weeks were kind of rough, but I knew what I had to do and I knew Germaine didn't want me not to come out here and not perform for the crowd," said Bolt.

Perform he did as he clocked 10.03 seconds to win the men's 100 metres, the final event of the night, ahead of Jevaughn Minzie, second in 10.15 seconds, and Nickel Ashmeade, third in 10.18 seconds.

Bolt did a victory lap following the race. Earlier he had been received by a guard of honour.

He admitted being race rusty and said he plans to do more for his final professional race, which is planned for the IAAF World Championships in London this August.

"I would like to work on my start as it has not been good over the years, and I just want to remain injury free so I can put on a show," he said.