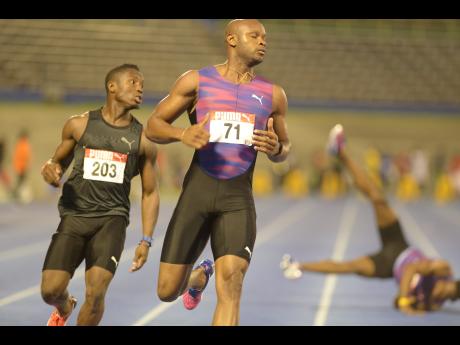 Asafa Powell ( centre ) wins heat one of the men 100m ahead of Oshane Bailey (left) and Kemar Bailey-Cole (right ) who was injured at the JAAA National Senior Championships on Thursday.

Asafa Powell has submitted a request for a medical exemption from last weekend's National Championships which would allow him to be considered for selection for the national team to the International Association of Athletics Federations World Championships in Athletics in London.

Powell, 34, was forced to withdraw from Friday night's men's 100m final at the Jamaica Amateur Athletics Administration National Senior Championships after aggravating an Achilles tendon injury he picked up earlier this season.

The 2015 IAAF Diamond League 100m winner suffered the injury at the 2016 Doha Diamond League in May and has been out of action since then. He competed in the semi-finals of the blue riband race in Jamaica finishing second in 10.15 seconds.

However he did not show for the final and his manager Tara Playfair-Scott told STAR Sports at the athlete had been hoping to recover but decided to play it safe on the advice of medical personnel.

"He had an Achilles tendonitis which is why he hadn't run in the (Racers) Grand Prix so we sat those meets out to try to heal the tendonitis. He had hoped to have gone the three rounds but he had twinges. He had it iced and he basically started to feel some paid after warming up for the semi-finals and after running he started to feel severe pain. He was advised to not to compete as it could cause further injury which would put him out for the rest of the season," said Playfair-Scott.

The men's 100m was won by Yohan Blake with Julian Forte in second and Senoj-Gay Givans in third. Playfair-Scott added that while she understood that the athletes had performed well she hoped that Powell's history would be given due consideration.

"We understand that people got out there and they ran and they did some good races. We definitely want him to be a part of the team and we hope the JAAA will look at the criteria and we have submitted a request for a medical exemption," she said.

Powell will only be doing light training in the meantime and was due to return to the doctor yesterday.