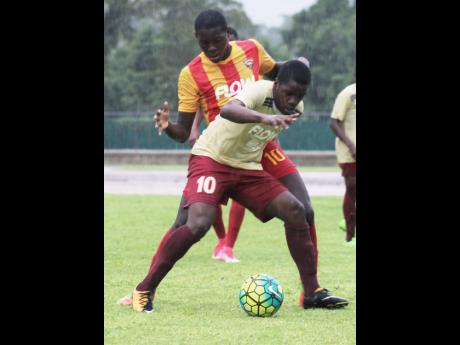 Tyreke Clarke of St James High (front) and Garnet Hudson of Cornwall College battle for the ball in their daCosta Cup football match at the Catherine Hall Stadium in Montego Bay last month. 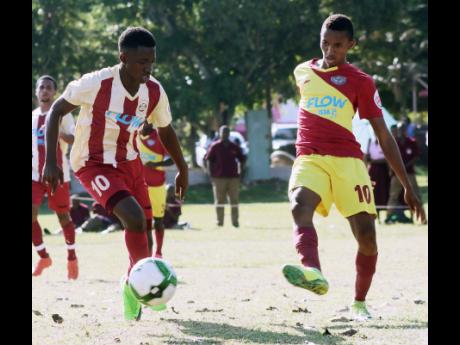 Defending Champions Cornwall College will be looking to bounce back this afternoon from a shock defeat they suffered Wednesday to Maldon as the ISSA-FLOW daCosta Cup resumes action this afternoon with matches across most zones.

Cornwall College will be on the road again to Anchovy, who can make this is a more than exciting affair. The champions could face an uphill task as Anchovy High have won their two home games so far with a 1-0 win over Maldon before turning back Irwin High 2-1. They have only lost to St. James High 1-0 so far.

A top-of-the table clash is set for Zone B at 3:30 p.m, when Rusea's host bitter rivals Frome in what is said to be a grudge match as the newly appointed Aaron 'Wild Boy' Lawrence of Frome was the coach of Rusea's last season.

This matchup will see two brilliant coaches go up against each other as the replacement for Lawrence at Rusea's this season is Vassell Reynolds, who won the FLOW Super Cup and brought Wolmers' Boys to the final of the Manning Cup last year.

In Zone C, Spot Valley go in search of a fifth straight victory when they visit Cedric Titus High who are unbeaten so far.

Zone H leaders Clarendon College who have had made an impressive start to this year's competition, scoring 22 goals and conceding none in three games will aim at extending their win streak when they visit Edwin Allen High, match set to kick off at 3:30 p.m.

- May Day vs Cross Keys

- A. Gallimore vs. Ocho Rios