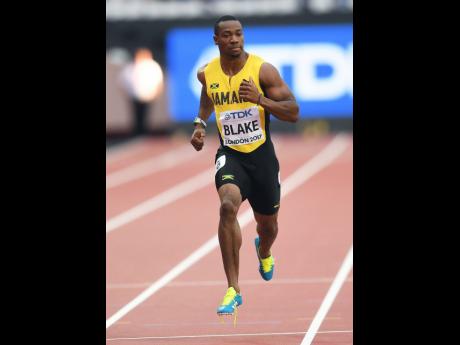 Former world 100m champion Yohan Blake said he is working very hard on improving his technique as he gears up to compete at next year's Commonwealth Games in Australia.

Blake told Star Sports in an interview yesterday that poor execution and an injury, were the factors which contributed to his disappointing showing at this year's World Championships in London, where he finished fourth in the men's 100m final. The powerful sprinter also failed to make the final of the men's 200m event in London.

"I feel very good, my coach is happy, training is going great and I am looking forward to this season," said Blake. "I kick it off with the Commonwealth Games and so I am going to start from there," he said.

"I just want to keep focused because I am over all my injuries," Blake said. "Leading up to the World Championships, I got an injury that cost me, but I am happy and I have been fixing everything and going forward, I know that Jamaica is going to look to me and so I am going to be a shoulder to lean on."

The 27-year-old Blake also stated that his coach Glen Mills has changed his training method this season, which has resulted in him dropping a lot of weight.

"Coach has changed it somewhat, he has taken a different approach to just let my body come down and just focus on my technique because even winning those last two races in Brussels and Zagreb, my technique faltered a bit and that caused me not to run the fast times that I am capable of," Blake said. "And so I am just focusing on my technique to stay upright and to be stronger."

"The season is going to start early for me, maybe in January because I have to get things up and running for the Commonwealth Games," Blake pointed out.