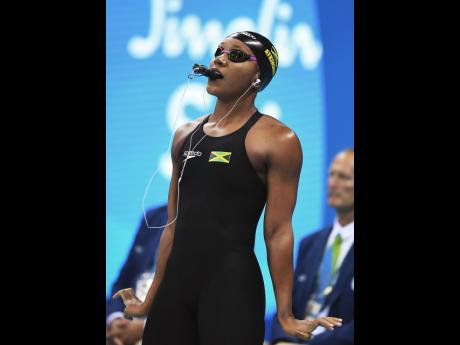 World Champion breaststroke swimmer Alia Atkinson is anticipating a very intense period of preparation for the upcoming Commonwealth Games. With the event set for April 2018, Atkinson expects the first three months of the year to be packed with high-level training. Speaking earlier this week, she revealed a tinge of lingering disappointment with her performances at the 2014 Games.

"2018 would basically be a hyper drive", said the three-time Olympian. "Trying to stuff as much things in three months because usually we're prepped for August and July to do our best."

Atkinson, who will be conducting a swimming clinic in Kingston this week, explained that big championships are usually held in the summer months.

"That's a big push, especially with the Christmas season and everybody being all over the place", she remarked. "So January, February and March are going to be pretty intense going in."

At the 2014 Commonwealth Games, she won a silver medal in the 50-metre breaststroke and a bronze in the 100 breaststroke. Asked if those disappointments still irk her, she was candid.

"You know, it does", she replied thoughtfully. "I will always have the intent to go into a race to win 100 per cent."

"But I won't put all my hopes as I did in 2014 because when it doesn't happen, it's devastating so I will go into the race ready to win it but if I come second or third or I just do my best, I'm going to have to hold out for that."

The winner of all of her 50-metre breaststroke races during the 2017 FINA World Cup, the 29-year-old Atkinson is clear about what she needs to do to get ready for next year's Games.

"I will have to set all the things out ahead of time, various training camps and all of that", she figured. "I'd have to set that out before this year ends so when January comes, there's no 'what if' situation."

She is hoping to infuse her breaststroke swimming with something she felt in a pair of early season dips into the 100-metre freestyle and 100 butterfly. Prior to the start of this year's World Cup, she set national records - 55.35 and 59.94 seconds, respectively - in both events.

"When I swam that 100 free and swam that 100 fly and did those great times", she wistfully recounted, "There's a certain feeling that the body never knew before, that elation and joy."

"I'm trying to see if I can get that into my breaststroke", she added.