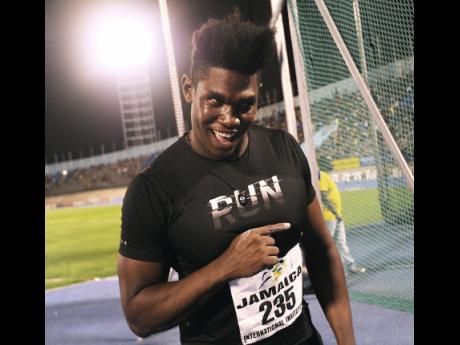 By the time Jamaica's Fedrick Dacres completed his very successful junior career, 65 metres was a safe distance for discus throwers in the senior ranks and reaching it guaranteed medals at the highest level. As Dacres discovered in 2017, that is no longer true. Far from being dismayed, the tall Jamaican is happy that standard is on the way up.

Third place at the 2013 and 2015 World Championships was won with throws taped at 65.19 and 65.18 metres. However, when Dacres threw 65.83 at the 2017 edition of the IAAF spectacle in London, he missed the podium by one place and more than 2 metres as surprise third placer Mason Finley of the United States set a personal best of 68.03 metres.

The writing was on the wall from the 2016 Olympics when 67.05 was the bronze medal distance.

Disappointed to miss a medal in London, Dacres noted the overall improvement.

"Actually I appreciate that because it means the standard is going up and I'm a part of that so it shows that we are getting better," he reasoned at a recent training session at the University of the West Indies.

Mindful that he missed the Olympic final through a combination of injury and a rain dampened throwing circle, he struck a grateful tone for a season where he regularly surpassed the old benchmark.

"We're thankful that we're actually on it now", he remarked. "Because last year wasn't a good year."

In 2017, he extended the Jamaican record to 68.88 metres and sprinkled throws past 65 in twelve different meets.

Moreover, his national record effort made him the third longest thrower of the year.

In 2015, he was in the World Championship final but fared badly; as he recalled, "The year before wasn't so good either."

In a bittersweet observation about London, the 2011 World Under 18 and 2012 Under 20 champion said, "This year we barely missed a medal."

In fact, his fourth place finish is the best result by a Jamaican discus thrower at the World Championships or the Olympics. As a bonus, his training partner Traves Smikle was eighth.

Dacres, who ended his 2017 endeavours by winning the discus at the Gerald Claude Foster Over Distance and Field Events meet on December 17, and Smikle are coached at the University of the West Indies by Julian Robinson.