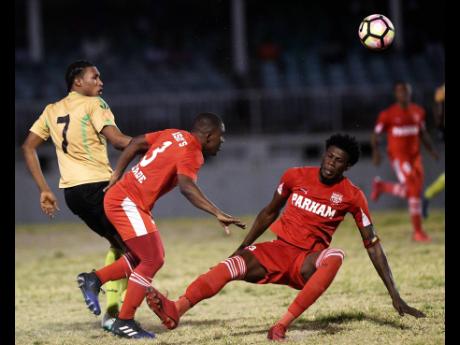 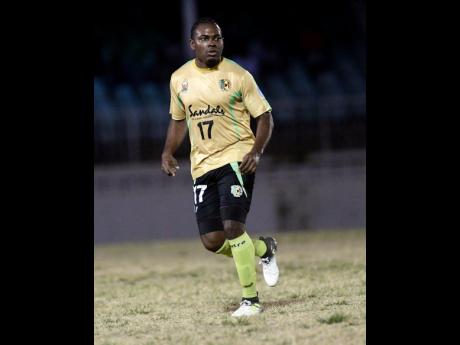 Jamaican midfielder Kimorlie Brissett of Grenades FC anticipates a pass during their match against defending champions Parham FC in the Antiguan Premier League at the Antigua Recreation Ground on Sunday.
1
2

Three Jamaican footballers now playing in the Antiguan Premier League (APL) said that while they enjoy the financial benefits, they are being enviously singled out by their peers.

Blake Thompson, a 28-year-old centre back; Atapharoy Bygrave, a 28-year-old striker; and Kimorlie Brissett, a 23-year-old midfielder; all play for Grenades FC. They said that they left Jamaican football because the salary on offer in Antigua was far more enticing. However, being foreigners who get a higher salary than their local colleagues and also living accommodation taken care of by their team, the trio said that it makes them unfairly targeted by those who do not enjoy the same benefits.

Grenades went down 2-0 to defending champions Parham FC on Sunday, in a very physical game where referees ruled "play on" for a lot of tackles, which would have probably drawn free kicks and bookings in Jamaica.

Thompson said that it has always been this way since he first played in the country.

"I've been here six seasons now and every season licks here, kicks there and nothing from the referee dem. That a di only problem mi have wid di league. Coming to play here and the referees? No man, horrible, trust me! The referee dem have a thing against outsiders, especially Jamaicans," the former Portmore United man said.

Bygrave, who played for August Town FC in Jamaica, agrees.

Brissett, a journeyman who played for a number of clubs in Jamaica, including Harbour View FC, Dunbeholden, Barbican FC, Cavalier SC, and Waterhouse FC, added to that.

"Is not just Parham (that were overly physical with them). Any time a team play against we, dem come hard. You see if you come and watch a different game with a different team, dem look like nobody. Once is we though ...," he said.

The APL is a 10-team league with a straight round-robin format, meaning each team meets twice, over 18 games and the winner is the team with the most points. Matches are played at the historic Antigua Recreation Ground, with double headers on Saturdays and triple headers on Sundays. Brissett said that this is a good idea as it increases the number of spectators in the stands for all games, improving the overall atmosphere.

There is also the Super 8 Cup, where the top four APL teams play the top two teams from both lower divisions.

The Jamaicans said that aside from what they describe as the overly physical play, they do enjoy their time playing football in Antigua.

"My first season, it was all good," Thompson said. "My first season we won the league. It was a plus for me and it's still a plus for me because most people actually say I'm local now. I'm from here for being here so long. I didn't really get bad feedback from fans and teammates. We have a lot of fans, as Jamaicans, playing over here. We have a big fan base. "

The league has only three games remaining and Grenades, with 26 points, sit in fourth place behind leaders Greenbay Hoppers FC (31 points), second-place Five Islands FC and third-place Parham FC, who both have 28 points. Bygrave said his immediate aim is to not only win the league but also top the goalscorers chart, as his seven goals put him just four short of the current league leader.

The players will become free agents at the end of the season as foreigners are typically given only one year contracts, however, they all told STAR Sports that they look forward to returning.