I am improving - Bloomfield pleased with new indoor record 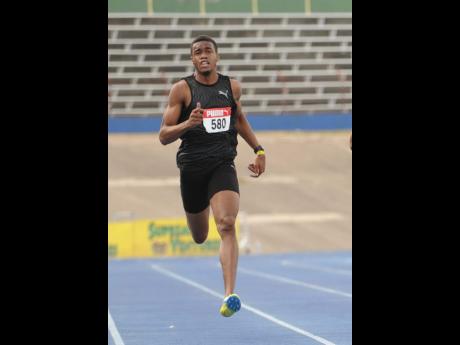 FOLLOWING his national indoor 400-metre record a few weeks ago at the South Eastern Conference (SEC) Meet, Akeem Bloomfield again improved the mark, clocking 44.86 seconds to finish second overall at the NCAA Division One Indoor Championships at the Gilliam Stadium in College Station, on the campus of Texas A&M University on Sunday.

Bloomfield won his heat ahead of his University of Auburn team-mate, Nathon Allen, who was second in a personal best 45.27 seconds and fifth overall.

"I feel very good about the time. It's a new personal best so I cannot complain, as bettering the national record is a great accomplishment for me. It shows that I am improving as I go along. Going sub-45 seconds indoors is a great stepping stone for me. That gives me good ground to work on for my outdoor season. I am really happy about the time and happy for all my success this indoor season. It's time to rest a bit, refocus and get back in the game for the outdoor season", Bloomfield told STAR Sports.

It was also a good meet for Bloomfield's teammates as the former St Jago High duo of Raheem Chambers and Natalia Whyte had top three finishes in their events.

Chambers logged a personal best of 6.53 seconds to finish second in the men's 60 metres finals, just behind Elijah Hall of the University of Houston, who won in 6.52 seconds.

Whyte finished third in the Women's 60 metres finals in 7.12 seconds, just getting the better of teammate Jonielle Smith, formerly of Wolmer's Girls', who ended fourth in 7.19 seconds.