Whitmore said to quit for more than money 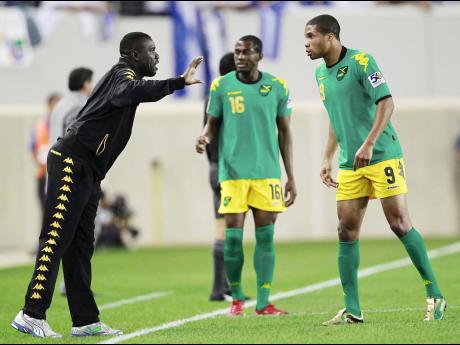 Jamaica head coach Theodore Whitmore (left) gives instructions to Ryan Johnson (right) and Omar Daley during the first half of a CONCACAF Gold Cup match in 2011.

A source close to the matter has told STAR Sports that Theodore 'Tappa' Whitmore's resignation as interim national senior men's football team head coach was down to more than just money.

Whitmore resigned yesterday afternoon, after failing to show for a meeting set with Jamaica Football Federation (JFF) president Michael Ricketts to further discuss a permanent contract to lead the team in the future. For months, there had been reports that Whitmore was frustrated by what was reported to be a salary offer of US$3,000 (roughly J$373,000) per month, a figure way below the estimated US$45,000 (J$5.6 million at that time) offered to his predecessor Winfried Schafer, who had a stint with the national team between 2013 and 2016.

However, the source, who asked for anonymity, said that there were numerous reasons leading to his decision, including frustration with the 1-1 international friendly draw with Antigua and Barbuda at Sabina Park on March 25.

The source said that Whitmore felt that the result was an unfair reflection on his coaching, as it is said that he had voiced concerns about squad preparation leading up to the game, which he felt were not adequately addressed.

The source also said that interim national senior men's team assistant, Jerome Waite, who is also the head coach of Red Stripe Premier League (RSPL) side Arnett Gardens FC, is expected to take charge of the Reggae Boyz in their upcoming friendly internationals against St Kitts and Nevis on April 26 and Antigua and Barbuda three days later. These games follow close behind the RSPL final on April 23.