Monkey off his back! - Dacres shakes off self-doubt with discus Commonwealth Games gold 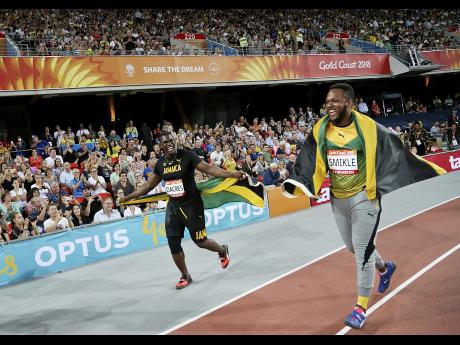 Collin Reid Photo courtesy of Guardian Life, Courts Jamaica, VMBS, Sports Development Foundation and Alliance Investments. Jamaica's Fedrick Dacres on his way to Commonwealth Games gold with a record throw of 68.20m in the Men's discus throw yesterday on the Gold Coast, Australia. His teammate Traves Smikle completed the quinella for Jamaica, taking silver with his distance of 63.98m.
1
2

National discus record holder Fedrick Dacres said that he is relieved to have the monkey off his back, after winning gold in the men's discus event at the Commonwealth Games on the Gold Coast, Australia, yesterday.

Dacres set a championship record of 68.20m to win the event, while teammate and friend Traves Smikle claimed the silver medal, throwing a distance of 63.98m.

"After the disappointments of Rio and London, I was doubting myself, but now what I can see is that I'm a better person for this," Dacres told STAR Sports.

"I do think I can do more and I would love another chance at the Olympics or World Championships. But I'm just grateful and living in the moment right now. I'm thankful and I'll be working (to top this)."

The University of the West Indies student said that hearing his name announced as winner of the event at Carrara Stadium was a surreal moment for him.

"I felt relaxed, more and more relaxed (as time went by) and the only thing that came to mind was actually, 'Jah know!' that was it," Dacres shared.

After a first-round throw of 66.20m, Dacres had said that he was just "playing it safe," with his performances and his aim had just been to get into the final.

However, after claiming the record, the 24-year-old said he started thinking about his personal best.

"My first throw was actually to just get a mark," he said. "When I got the mark, I said 'Okay, cool. Now let's see if I can cover the field with my second throw.'

But the former Calabar High thrower said that he was also watching to see how Smikle, another Calabar old boy, was performing as he was hoping for a Jamaica one-two in the event.

"I think it (second throw) would've covered the field, other than Traves," he said. "But we've competed back and forth so I knew maybe if Traves went farther, I would've responded. But by my third throw, I saw that Traves' rhythm was off and I was trying for him to feel the rhythm again and I feel the pull. I felt like I was in control at that point, but I just tried to be better. I actually just tried to get a bigger PB (personal best), tried to get the championship record and just dig for more."

When asked what was his next focus, Dacres joked "exams."

Dacres set the national record of 69.83m at the King of the Ring meet at the Excelsior High School on February 10.