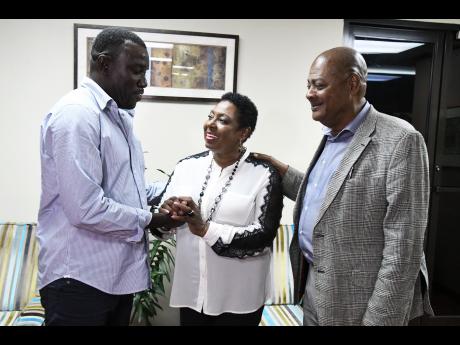 National senior men's football team head coach Theodore 'Tappa' Whitmore said that he is relieved that the impasse between himself and the Jamaica Football Federation (JFF), which saw him resign last week, over a disagreement over contract terms, is over. And now he is hopeful that after withdrawing his resignation, he and the Federation can now return to their focus on building the national programme.

Whitmore met with members of the JFF, as well as sports minister Olivia Grange and other members of her ministry to settle the dispute regarding Whitmore's contract, which had terms he felt were not satisfactory.

In January, Whitmore had previously given the JFF four weeks to come up with an offer which he found appealing, however, negotiation broke down as Whitmore had felt he was not being offered a salary that was on par with his achievements. He had also said that he felt disrespected with how he was treated throughout the months of talks and decided to resign, after he was asked by JFF president, Michael Ricketts, for more time to improve the offer. That extended time did not yield an agreement between both sides. However, yesterday afternoon's meeting ended with both sides feeling pleased.

"I'm very pleased with what transpired at today's meeting between myself, the JFF and the minister," Whitmore said. "Recently I tendered my resignation and I must tell the public that I'm here to withdraw it, based on what transpired from (yesterday's) meeting. I'm looking forward to getting back to doing what I love. That is coaching and to make sure that the nation's football is priority, and we move forward with myself and the federation and the ministry, to make it a success."

"We have met with the minister and the truth is that we are delighted with what actually transpired. We met and we have amicably settled whatever issues there are. I think we are ready to move on in the interest of football and in the interest of developing the sport nationally. It was important that we met (yesterday) afternoon," the JFF president said.

Grange said that she hopes that the meeting will improve Whitmore's relationship with the JFF, going forward.

"I'm very happy that I was able to sit at the table with the president of the JFF and his team, along with representatives from my ministry, as well as with Coach Whitmore," Grange said. "We have been able to resolve the issues that have been out there in the press and I am confident that going forward, Coach Whitmore and the JFF will have a much stronger and better relationship. We discussed the contract and all parties have come to an agreement."

The ministry said that the two parties agreed in the meeting that Whitmore would withdraw his recently submitted resignation and continue as head coach of the national team; the JFF will offer Whitmore a new contract; and all issues between the former national player and the JFF are now considered settled.