Adrian Frater | Of western football and dereliction of duty 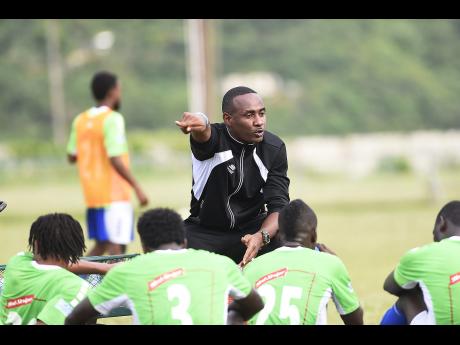 Gladstone Taylor / Photographer Montego Bay United (MBU) coach Dillon Thelwell (top) gives his team a halftime talk during their game against UWI FC on Friday, January 5, 2018, at the UWI Mona Bowl. Thelwell was reappointed to the role in an interim capacity after previous coach Vassell Reynolds was fired last Friday.

Earlier this week, Paula Llewellyn, the director of public prosecutions (DPP), told participants at the Association of Caribbean Commissioners of Police's (ACCP) 33rd annual conference in Montego Bay that strong and effective leadership is needed for the police to successfully investigate and prosecute gang-related cases.

While building the nation's football is not a crime-related strategy, I believe the strong and decisive leadership of which Llewellyn spoke are the principles that the Jamaica Football Federation (JFF), especially its president, Michael Ricketts, should embrace, if it really cares about making Jamaica's football a credible product.

testicular fortitude. I simply can't believe that the federation has allowed persons - whose history of putting parochial interest above the national interest is undeniable - to ambush the initiative once again.

It has come as no surprise to me that Montego Bay United Football Club (MBUFC), which is arguably the nation's strongest club in terms of infrastructure, has signalled to the Premier League Clubs Association (PLCA) that it is pulling out the league because it is not financially viable, which is a truth the other clubs would do well to acknowledge.

To me, the Kingston and St Andrew Football Association's (KSAFA) claim that a franchise system would hurt local football is just a cop out, to keep the Red Stripe Premier League (RSPL) as a Kingston-dominated competition. A competition that does not have representation from the majority of the parishes across Jamaica cannot be a true national competition. So it is the current format of the league that is the real stumbling block to development.

The recent statement by a KSAFA official, claiming that organisations with an interest in supporting the proposed franchise system. This would be better served investing in the existing system, speaks volume of the archaic thinking and lack of vision, which is crippling the nation's football and undermining our capacity to realise our fullest potential.

With their ability to use their strength in numbers to make the type of changes needed to create opportunities for rural football, I believe some of the rural parish football association presidents should be cited for dereliction of duty by their affiliates and kicked out of office. In my opinion, many have put overseas trips above the development of their home parish.

It is no secret that year after year, every single parish churns out an encouraging amount of raw material from the daCosta Cup schoolboy football competition.

Unfortunately, upwards of 80 per cent of these players end up by the wayside because Kingston has captured the RSPL, the primary vehicle needed to open up opportunities for them.

Recently, a KSAFA official made it quite clear that his association would not support a franchise system and was basically prepared to do their own thing outside of the established framework in the JFF went ahead with the franchise. I believe the rural administrators should test them unless they are prepared to keep on watching the tail wagging the dog.

As things are now, rural Jamaica is being overshadowed in terms of sponsorship opportunities from corporate Jamaica because the Kingston clubs are in the forefront. It is no wonder that frustration appears to be getting the better of Montego Bay United. In 1998, when Jamaica qualified for the FIFA World Cup in France, western Jamaica players dominated the team. Today, we have just one single pick.

I am saddened by the state of western Jamaica's football and it is against that background that I am calling on Everton Tomlinson, the president of the Westmoreland FA; Sheridan Samuels, the president of the Hanover FA; Linnel McLean, the president of the Trelawny FA; and Gregory Daley, of the St James FA, to wake up from their apparent slumber and start showing some respect to the legacy of Wesmore Thomas, Anthony Marks, and Frank 'Bim' Williams, who laid a foundation in the 1980s and 1990s.